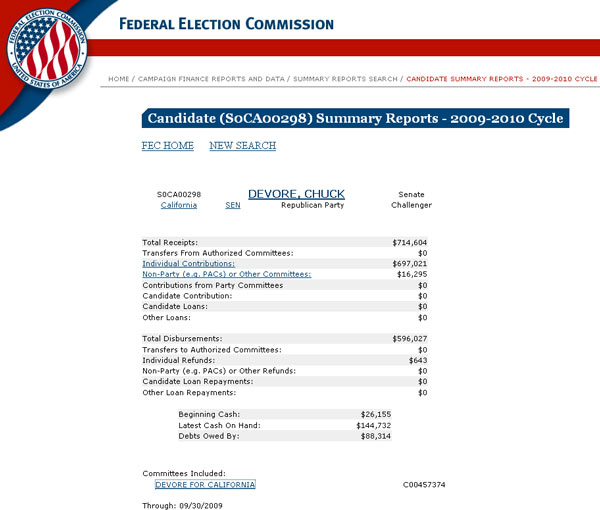 The official filing  for the ending third quarter (September 30, 2009) is now posted over at the Federal Elections Commission although the National Journal had a summary earlier.

You can generate your own DeVore FEC report in PDF format here.

All Flap knows is that California United States Senator Barbara Boxer is licking her chops at the prospect of EVER running against a Republican candidate with so little monetary support. After all, DeVore has been campaigning for almost a year (as soon as he won re-election to the California Assembly and is term limited out from running for re-election) and has a “NET” cash on hand of $56K compared to Boxer’s $6.35 million.

Now, Flap wants to know why Assemblyman DeVore is fibbing to the San Francisco Chronicle when he is stating he has “a gross” of about $600,000 in the bank. Uh No.

Chuck, despite your tweets from you and your paid flacks, like Joshua Trevino, you ain’t even close to $600K. You are closer to $60K and would be even closer to $60K if you hadn’t donated funds to Senate candidates Pat Toomey and Marco Rubio and the National Conservative Campaign fund.

Is there any wonder why DeVore claims that he is being dissed by the national GOP and the NRSC (national Republican Senatorial Committee)?

DeVore simply does NOT have the support for his candidacy and in a year of candidacy has NOT been successful in fundraising.

Should Carly Fiorina not run in this race (which I believe she will), look for someone else to jump in at the last minute.