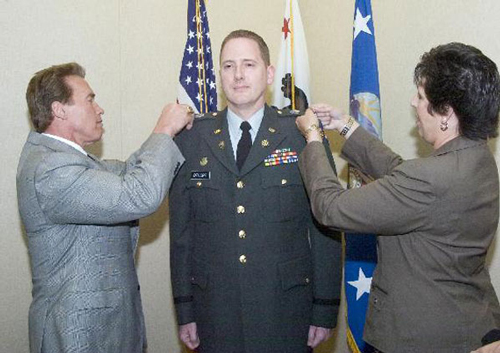 The remark reflected his effort to portray himself as an outsider in California politics â€” albeit one in sync with both the Republican faithful and the “tea party” protesters who have fanned voter disdain for officials in Washington and Sacramento.

DeVore said in a later interview that he was a credentialed reporter for the Orange County Register when the shooting occurred. He said he had called the Israeli military requesting to see the Bekaa Valley in Lebanon â€” identifying himself as an American student studying in Egypt, a reporter and member of the U.S. Army Reserve â€” and was included in a media tour.

Frank Dowse, a Fiorina supporter and a retired 20-year Marine veteran from San Diego who served as a top advisor to NATO, said any attempt by DeVore â€” subtle or not â€” to imply that the Lebanon incident was related to his military service “is a bad move.”

“So in his office, I dictated to him a “Dear Colleague” letter that he personally typed up on his Selectric typewriter,” DeVore said. “Within a week, Duncan Hunter had 40-plus signatures â€” House and Senate, Republican and Democrats, that went to Reagan and [then-Defense Secretary Caspar] Weinberger â€¦ the idea was born.”

Hunter was then a Republican on the House Armed Services Committee. In a recent interview, he recalled DeVore as a staunch advocate of the Arrow program on behalf of the Reagan administration â€” but Hunter said he wrote the letter, and pursued the idea, on his own.

“No one in the administration said, ‘It was my idea’ â€” DeVore included,” Hunter said.