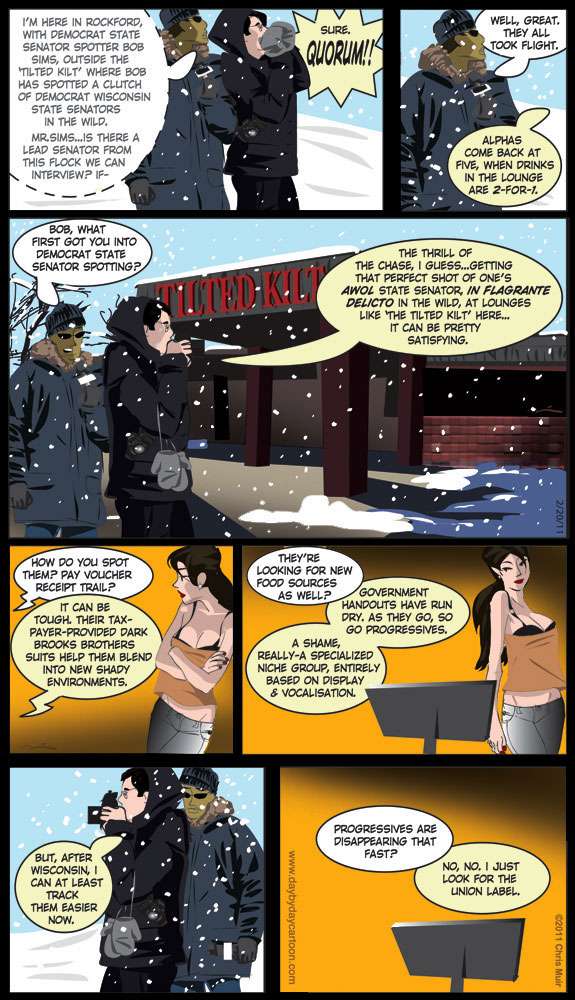 The Wisconsin Democrat State Senators who ran away from their constitutional oath last week should be ashamed of themselves and Wisconsin voters WILL punish them at their next election. In the meantime, state business/legislation languished while this game of chicken plays itself out.

Will there be a compromise?


With Wisconsin Gov. Scott Walker maintaining a hard line on his budget bill and Democratic senators refusing to return to Madison to vote, attention is turning to a group of moderate Republican senators to negotiate a compromise to the stalemate that has drawn thousands of protesters to the state capital for a sixth straight day.

The proposal, written by Sen. Dale Schultz and first floated in the Republican caucus early last week, calls for most collective bargaining rights of public-employee unions to be eliminated—per Mr. Walker’s bill—but then reinstated in 2013, said Mr. Schultz’s chief of staff Todd Allbaugh.

“Dale is committed to find a way to preserve collective bargaining in the future,” said Mr. Allbaugh in a telephone interview.

On Sunday, Mr. Walker reiterated his confidence that Republicans would pass their proposal intact.

I doubt it because this is “PUBLIC” employment not private and many states do not have collective bargaining for public/government workers. There is no guarantee for the unions here and remember –