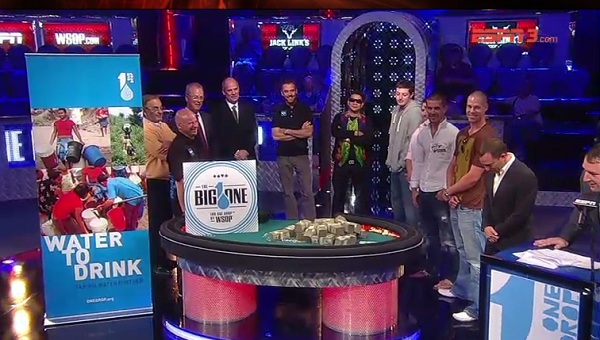 How cool is this?


The World Series of Poker has announced a $1 million buy-in tournament to benefit One Drop. One Drop, an initiative started by Guy Laliberte, founder of Cirque Du Soleil, focuses on supporting access to clean water worldwide. One Drop uses a distinctive approach based on social arts and popular education to raise awareness of water issues. The BIG ONE for ONE DROP poker tournament will raise awareness and funds to provide access to safe water to fight poverty around the world.

The Big One for One Drop will be the largest buy-in and the most significant charity initiative in poker history. The event takes place July 1-3, 2012, at the Rio All-Suite Hotel and Casino in Las Vegas. If at least 22 players register, the event will be an official bracelet event of the 2012 WSOP, and the winner will be awarded the first-ever platinum WSOP bracelet. Of the $1 million tournament buy-in, 11.11 percent of each entry will be withheld for One Drop.

Players scheduled to participate include Guy Laliberte, president of the board of directors, ONE DROP and founder of Cirque du Soleil, Bobby Baldwin, CEO of MGM-Mirage Resorts, and Phil Ruffin, owner of Treasure Island in Las Vegas. Professional poker players committed to playing the Big One for One Drop include Doyle Brunson, Andy Beal, Patrik Antonius, Gus Hansen, and Tony Guoga.

The event is capped at 48, but Dwan mentioned at the news conference, how cool it would be to have more players.

Caesar’s entertainment the owners of the WSOP will donate two seats, one of which will be won by satellite tournaments and one by promotion.

2 thoughts on “World Series of Poker Announces a $ 1 Million Buy-in Tournament on July 1, 2012 to Benefit One Drop”