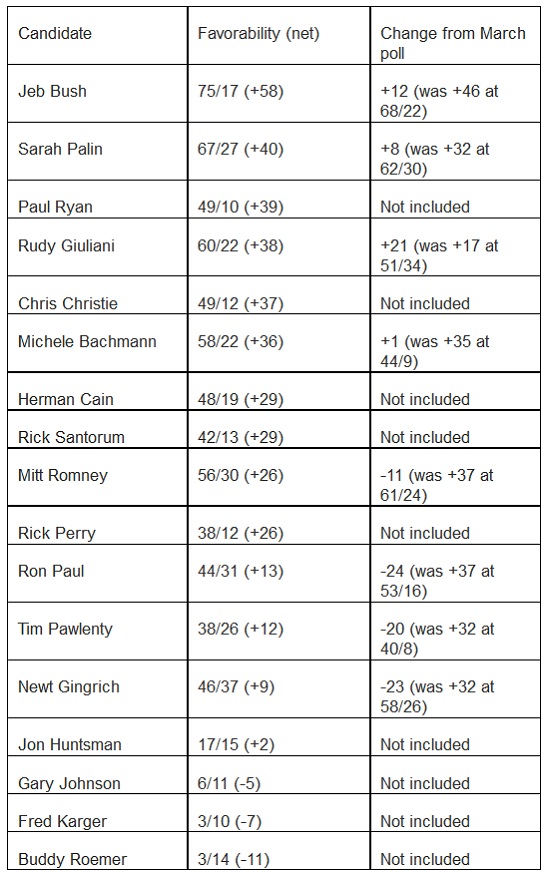 
Mitt Romney has a double digit lead for the Republican Presidential nomination in Florida, further cementing his front runner status in the wake of Mike Huckabee’s exit from the race.

Romney now has the outright lead in PPP’s most recent polls in all 5 of the key early Republican contests: in addition to the Florida advantage he’s up by 9 in South Carolina, 6 in Iowa, 15 in Nevada, and 23 in New Hampshire.

Mitt Romney continues to poll well in Florida and can be continued to be regarded as the front-runner. But Michelle Bachmann has surged. So, has Herman Cain.

With the likelihood that Sarah Palin will NOT run for the Presidency and with Bachmann’s likely good showing in Iowa and South Carolina, Florida may be the momentum state for Bachmann to overtake Mitt Romney. Bachmann has a real chance here in picking up Palin and Cain voters once they are out of the race.

But, Sarah Palin remains the wild card and should she run, she might enable Mitt Romney to split the conservative Tea Party vote and win with all of the rest.


Beyond Romney’s continued strength the big stories here are the rise of Michele Bachmann and the collapse of Newt Gingrich. Bachmann’s 17% standing represents a 10 point gain from PPP’s last Florida poll in late March, when she stood at only 7%. Her strength comes from leading the field with ‘very conservative’ voters at 21%, followed by Palin at 20%, and Romney at 18%.

Romney’s Florida lead is built on a familiar formula. He’s not winning with the far right voters who constitute a plurality of the Republican electorate, but he’s at least staying competitive with them. Meanwhile he’s dominating the field with moderates (a 36-15 lead over Palin) and with voters who identify themselves as just ‘somewhat conservative’ (a 32-15 advantage over Bachmann.)