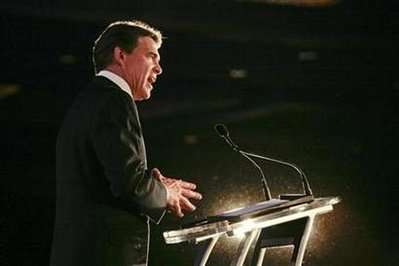 Presumably so. But, as a late entrant.


A Republican campaign veteran tells us that Texas Governor Rick Perry has decided to run for President, though the official word from Team Perry is still a definite maybe.

Our normally reliable Republican source reports that Mr. Perry has surveyed the field and decided to get in the race later this summer, perhaps around the time of the national prayer meeting that Mr. Perry is hosting on August 6 at a Houston football stadium. Our source also reports that Mr. Perry is aiming to compete in the Iowa Straw Poll, even though it occurs just a week later, on August 13. The thinking is that apparent front-runner Mitt Romney “does not reflect the Republican Party” and is therefore vulnerable to a credible challenge from the right, especially after Mr. Romney’s recent squishy remarks on global warming.

The anti-Romney Tea Party field is now getting crowded with the emergence of Rep. Michelle Bachmann and now Governor Rick Perry.

Now, will Sarah Palin now decide to move into the race, thinking that a divided multi-candidate field is HER path to the GOP nomination?

Perhaps and this maybe explains the Palin “Jury Duty” business.