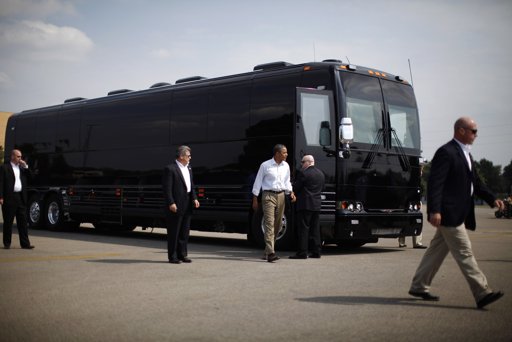 U.S. President Barack Obama steps off his bus as he arrives to meet the Silver Streaks football team at Galesburg High School, Illinois, August 17, 2011. Obama is on a Midwest bus trip through Minnesota, Iowa and Illinois

No made in America for this POL.


The bus was ordered by the Secret Service in July 2010 and delivered two months ago.

The feds bought the two coaches for $2.2 million from Hemphill Brothers Coach, based in Tennessee. It installed custom interior upgrades into the Prevost shell, which accounted for about half the cost.

The contract lists the country of origin as Canada and place of manufacture as “outside U.S. – Trade Agreements,” a possible reference to the North American Free Trade Agreement.

6 thoughts on “Photo of the Day: Obama’s Canadian Made Bus”