Rick Perry’s image is suffering, with his Positive Intensity Score among Republicans familiar with him down to 15, and below 20 for the first time. Meanwhile, Herman Cain’s score is now 30, the highest for any candidate this year.

The movement in Perry’s and Cain’s scores follows recent campaign developments, including poor reviews of Perry’s performance in the September debates and Cain’s surprising win in the Sept. 24 Florida straw poll.

In addition to Perry, Michele Bachmann and Ron Paul established new low Positive Intensity Scores this week, at 5 and 3, respectively. Bachmann was among the highest-rated candidates in June, peaking at 24, but has seen a steady decline since she posted a score of 20 in Aug. 1-14 tracking. Paul has not been rated as positively, with a high of 16 in May, and has registered in the single digits in all but one update since late May.

The graph says it all. 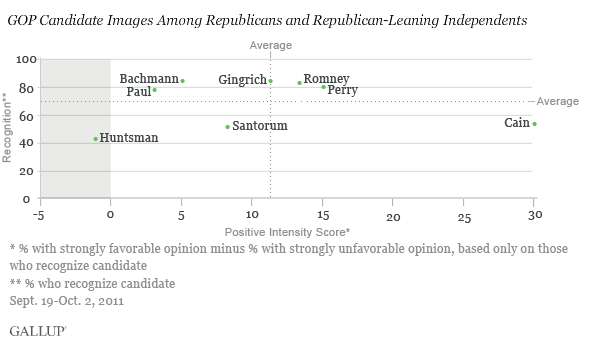