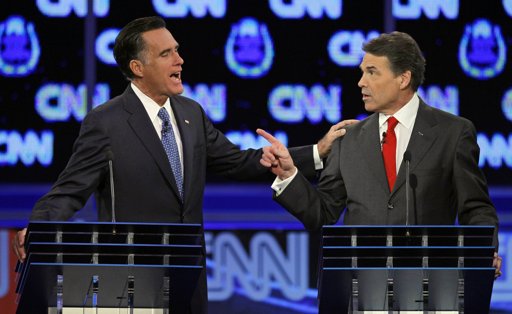 I, always wait a few hours before writing these post-mortems on the GOP Presidential debates. It is best to do so and let all of the spin sort itself out of the blogosphere and my e-mail box.

So, who won and who lost last night?

Mitt Romney – under personal attack from Rick Perry the Teflon candidate, while not unscathed, managed to repel Perry and remain the front-runner. Mitt has been crusing the past few debates and he proved he can mix it up with the best of them.

Barack Obama – the President actually looks sane and reasonable as compared to the haranguing group of GOP contenders. The GOP should enforce a poll requirement rule and limit who attends the next few debates and that goes from Rick Santorum to Ron Paul.

Herman Cain – his 9-9-9 tax was exposed as the double Valued Added Tax that it is. A tax which WOULD increase taxes on the majority of Americans. Rick Perry was correct when he said it won’t fly.

Michele Bachmann – she continued her decent into the third tier with an uninspiring performance, sticking to her talking points to win over religious conservatives in Iowa. Even if Bachmann wins in Iowa, she is done, just like Huckabee in 2008, but probably with less campaign funds. Romney hopes Michele has enough money to last until January 3 and the Iowa Caucuses. This may be a stretch.

Rick Perry – his Texas BULLYING style will not win him any friends in the GOP or with independent voters. Obama’s campaign team should want to run against this stereotypical boisterous “redneck Texan.” His personal attacks on Romney’s illegal alien gardeners were as hypocritical as Perry’s signing of the Texas Dream Act which delivered subsidized college tuition to Texas illegal aliens. While both are weak on illegal immigration, Perry is far the weaker and proved that again last night.

American people – CNN clearly lost control of this debate and at times it was embarrassing. It seemed it was a yell-filled fest with NO adult in the room. American voters have to be asking: is this the best America or the GOP has to offer as an alternative to President Obama?

What a choice in 2012: a “FAILED and INCOMPETENT” President Obama and a group of juvenile acting POSERS.