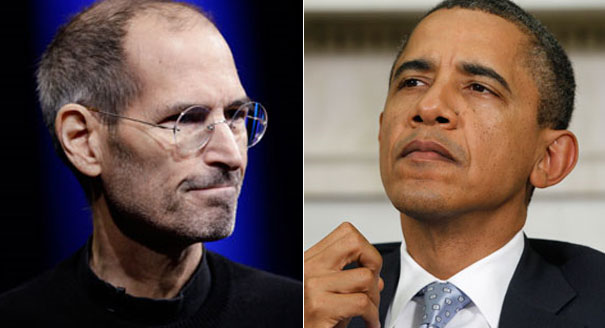 The late Steve Jobs of Apple, Inc. and the President

It probably was not because Steve Jobs was listening to a Michele Bachmann harangue.


Steve Jobs told President Barack Obama he was “headed for a one-term presidency,” citing the U.S.’s competitive disadvantages with China and a “crippled” education system, a new biography of the former Apple CEO indicates.

“You’re headed for a one-term presidency,” Jobs told Obama in a meeting last year where he asserted that the White House needed to be more friendly toward business, according to the Huffington Post, which obtained a copy of Walter Isaacson’s forthcoming book, “Steve Jobs.”

Jobs also told Obama that “regulations and unnecessary costs” put the United States at a competitive disadvantage with China, where companies can build factories more cheaply.

The recently deceased Jobs also told Obama that the education system was “crippled by union work rules,” according to Isaacson. Jobs proposed principals be able to hire and fire teachers based on merit, and to extend the length of both the school day and academic year.

Jobs also suggested that Obama meet with several other CEOs who could talk about the needs of innovative firms, but in a characteristic huff, Jobs declared his intention to skip the event when the White House added additional names to the list.

Jobs also objected to the menu of that meeting, telling a venture capitalist that shrimp, cod and lentil salad was “far too fancy” and objecting to a chocolate truffle dessert. The White House overruled him, according to the book, citing the president’s fondness for cream pie.

According to the Huffington Post copy of Isaacson’s book, Jobs was reluctant to take a meeting with Obama without a personal invitation from the president. A five-day standoff ensued due to his stubborn insistence on this point, despite his wife’s exhortation that Obama “was really psyched to meet with you.” They eventually met at the Westin hotel at the San Francisco airport.

Well, Steve Jobs was correct. The business climate, especially in California is unnecessarily laden with rules, regulations and costs. It is cheaper to do business and make products in China.

Also, the California public school system is crap and has been for decades. Apple, among other companies, must rely on foreign born, educated and trained scientists to fill their work positions.

But, it is nice to know that Obama has a fondness for cream pies.

4 thoughts on “Steve Jobs Tells Obama: Dude, You Are a One Term President”