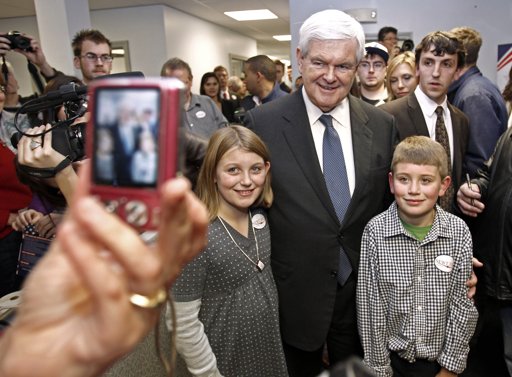 Republican presidential candidate, former House Speaker Newt Gingrich, poses for a picture with ten-year-old Carmella Adair and her eight-year-old brother George at a kick-off party for the opening of the Newt2012 office in Manchester, N.H., Friday, Nov. 11, 2011

Perhaps, but Jennifer Rubin does the vetting of the former House Speaker.

In short, Gingrich isn’t exactly the conservative dreamboat the right has been pining for. Just as his dexterity in debates has given him a lift, the penchant for gaffes places him in constant peril. He’s better informed than Perry and Cain and actually knows something about foreign affairs, but the idea that he is the solution to the ideologically erratic Romney is, well, absurd. That said, for those now embarrassed to vote for Cain or Perry, Gingrich may be a more acceptable choice, so long as he doesn’t once again blow himself up.

But, unless there is a draft candidate movement, the ONLY real choice for GOP voters will be Mitt Romney or Newt Gingrich. The others like Herman Cain, Michele Bachmann and Rick Perry just won’t cut it.

At present, it is a hard choice, but I am leaning towards Gingrich.