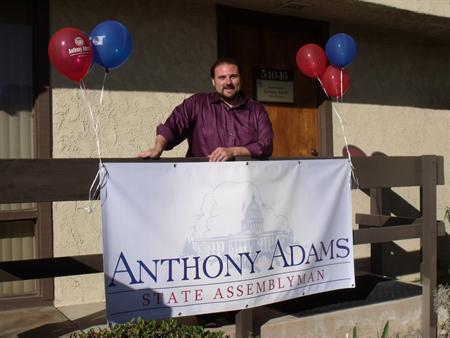 Former Republican Assemblyman Anthony Adams is looking to return to politics with a bid for an open inland Southern California congressional seat.

Adams, who recently changed his registration to decline-to-state, plans to run as a “no party preference” candidate on the ballot for the 8th Congressional District. The Republican-leaning seat, which stretches along the Nevada border, has attracted a handful of candidates already, including Assemblyman Paul Cook, R-Yucca Valley, and Minuteman Greg Imus, a former chief of staff to GOP Assemblyman Tim Donnelly.

Adams, of Hesperia, decided not to run for a third and final terms in the state Assembly in 2010 after surviving a recall effort sparked by his vote to temporarily increase taxes as part of a 2009 budget deal. He said at the time that he wanted to try to pass the bar exam and finish a novel he had been working on.

Certainly, it is in the realm of possibility that Adams could be running against his former party in November.

The demographics of California CD-8 are here.