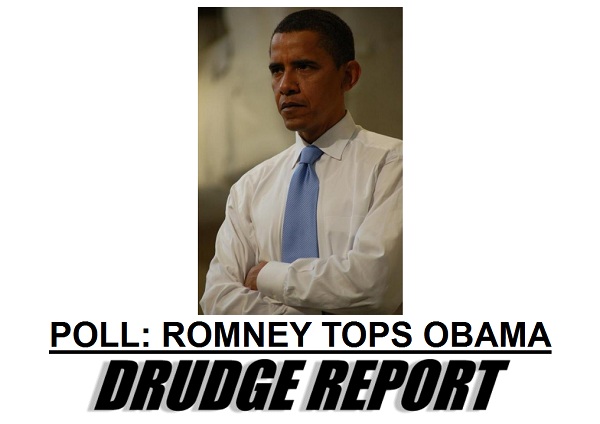 According to the latest Fox News Poll.

Republican Mitt Romney holds a slim edge over President Obama in a head-to-head matchup, a Fox News poll released Thursday shows. In addition, the poll finds the president’s job rating has dropped to its lowest point of the year.

In a presidential matchup, Romney tops Obama by 46-44 percent if the election were today.

As with every Romney-Obama matchup in the past six months, the race is so tight that it is within the poll’s margin of sampling error. This, however, is only the second time the Fox News poll shows Romney on top. The first time was November 2011, when he was also up by 2 percentage points.

The poll was conducted Monday through Wednesday. On Tuesday, Rick Santorum suspended his presidential bid — giving Romney a clear path to the Republican nomination.

More Republicans (42 percent) than Democrats (32 percent) or independents (34 percent) say they are “extremely” interested in the upcoming presidential election.

Even so, the strength of party support in the matchup is dead even: 85 percent of Democrats back Obama and 85 percent of Republican back Romney.

Among the highly sought after group of independents, the poll found 43 percent back Romney and 37 percent Obama. Nearly one in four independent voters (21 percent) is undecided or won’t vote for either of the major party candidates.  Last month, independents split evenly between Obama and Romney at 40 percent each. In February, Romney had a 9-point advantage.

The poll shows the gender gap may not solely be a problem for the Republican candidate. Women are more likely to back Obama (by 49-41 percent), while men are even more likely to give their support to Romney (by 52-38 percent). The 2008 Fox News national exit poll showed women voted for Obama over Republican John McCain by 13 percentage points (56-43 percent). Historically, exit poll results show women have consistently backed the Democrat over the Republican in presidential elections.

Now that Mitt Romney has clinched the Republican nomination, it is game on.

The Hilary Rosen flap may indeed hurt Obama enough that his female support may wane and any gender gap to his advantage may narrow.