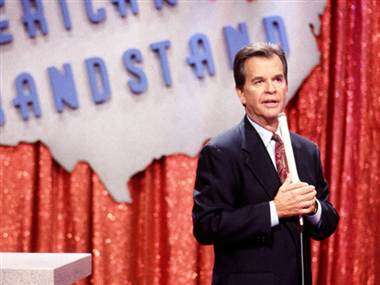 Dick Clark has passed away.

Clark suffered a massive heart attack after entering St. John’s Hospital in Santa Monica on Tuesday night for an outpatient procedure, his family said in a statement.

Attempts to resuscitate him were unsuccessful.

Clark had suffered a stroke in 2004, which forced him to significantly curtail his hosting of “New Years’ Rockin’ Eve,” a show he created in 1972.

Long dubbed “the world’s oldest teenager” because of his boyish appearance, Clark bridged the rebellious new music scene and traditional show business, and equally comfortable whether chatting about music with Sam Cooke or bantering with Ed McMahon about TV bloopers. He long championed black singers by playing the original R&B versions of popular songs, rather than the pop cover.

Ryan Seacrest, who took over main hosting duties on the New Year’s countdown show from Clark after years of working beside the legend, said in a statement Wednesday that he was “deeply saddened.”

“I idolized him from the start, and I was graced early on in my career with his generous advice and counsel,” Seacrest said. “He was a remarkable host and businessman and left a rich legacy to television audiences around the world. We will all miss him.”

I have grown old along with Dick and I will miss him.