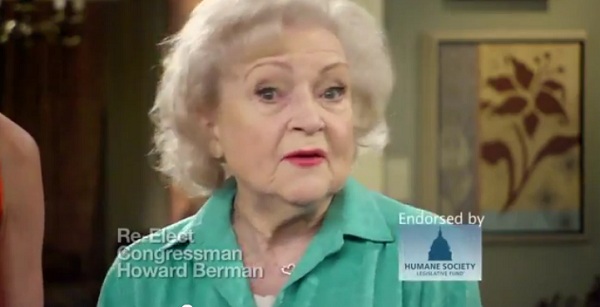 I don’t know which endorsement is more important though – Betty White vs. the Los Angeles Times.

If you recall Rep. Howard Berman is in a top two Democratic Party battle royale with Rep. Brad Sherman.

The Democratic slugfest underway in California’s 30th Congressional District is the product of two political developments of recent years: the open primary and nonpartisan redistricting. The former means that the two top finishers in the upcoming congressional race will face each other again in the fall, even if both are from the same political party; the latter has resulted in two titans of the Southern California Democratic Party having to face each other. Rep. Howard Berman and Rep. Brad Sherman are admirable public officials with long and impressive records of service. Either would provide solid representation for the 30th District. Faced with a tough choice, The Times endorses Berman.

This is a Democratic District and Hollywood has weighed in – heavy.

Watch Betty White’s video below – it is worth a laugh or two: