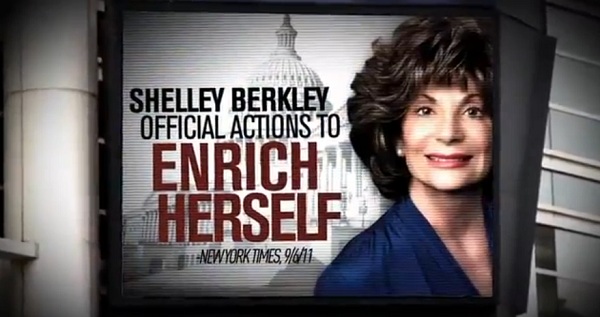 Karl Rove and his associates over at Crossroads GPS are up with this video of Rep. Shelley Berkley who is running for the United States Senate in Nevada.

The House Ethics Committee has launched an investigation of Berkley.

The House Ethics Committee has voted unanimously to launch a formal investigation into allegations that Rep. Shelley Berkley (D-Nev.) used her position to benefit the financial interests of her husband — a blow to her candidacy in one of the nation’s most competitive Senate contests.

The ethics panel said Monday that it will probe “alleged communications and activities with or on behalf of entities in which Representative Berkley’s husband had a financial interest.”

News reports last fall detailed moves made by Berkley to sponsor legislation or influence federal regulators in ways that favored the business interests of her husband, Larry Lehrner, who operates dialysis centers in Nevada and has actively lobbied lawmakers to help kidney care providers.

Berkley, 61, is a seven-term Las Vegas congresswoman and candidate in a closely watched Senate race against Sen. Dean Heller (R-Nev.) that observers believe could be a pickup for Democrats.

The ad is pretty brutal, but that is how Rove and Co. roll. Here is the video embedded below: