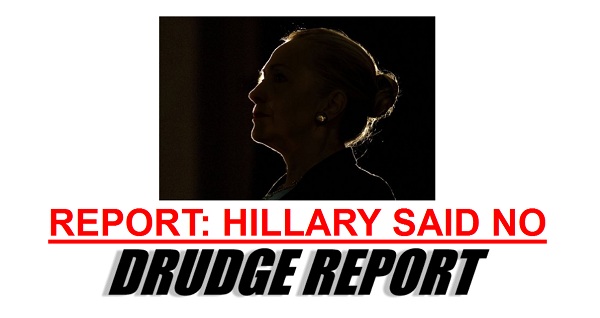 Secretary of State Hillary Clinton was pressed by her husband and a top Obama aide to consider replacing Vice President Joe Biden just a couple of weeks ago, claims the author of the New York Times bestseller “The Amateur.”

But Clinton, exhausted from four years of international travel and diplomacy, shrugged off the suggestion to lay the groundwork for her own 2016 bid with her husband at her side, according to author Ed Klein.

“As recently as a couple of weeks ago, the White House was putting out feelers to see if Hillary Clinton was interested in replacing Joe Biden on the ticket,” Klein told Secrets. “Bill Clinton, I’m told, was urging his wife to accept the number two spot if it was formally offered. Bill sees the vice presidency as the perfect launching pad for Hillary to run for president in 2016.”

He made similar comments Thursday night to CNBC’s Larry Kudlow. The White House has dismissed speculation of a Clinton for Biden swap despite a string of recent gaffes by the vice president.

Klein said she cited two reasons: If elected, she didn’t want to be tied to Obama’s left-leaning politics in her own 2016 bid. Second, if Obama loses, she would be tarred as a loser.

There is little doubt that Hillary Clinton is the presumptive Democratic Presidential nominee for 2016.

And, she does need to rest, recharge from a whirlwind duty of keeping Obama’s foreign policy together.

Plus, there is a very good chance that Obama will lose in November and she does not want to go down with the Titanic.

This is a good leak from the Clinton Cabal to make sure everyone knows that Obama did not choose Biden over Hillary, but that Hillary told the President to go pound sand.

One thought on “Hillary Clinton: Not Interested in Running as Obama’s Vice President”