Robert Novak in his June 4 Column: New Confirmation Trouble has this about Senator Tom Harkin, D-Iowa:

On the day before Texas Supreme Court Justice Priscilla Owen was confirmed by the Senate as part of a negotiated compromise, Democratic Sen. Tom Harkin called her “wacko.”

Harkin, appearing on liberal Randi Rhodes’s national radio talk show, became animated as he said of Owen: “This is not a person to put on the bench for a lifetime appointment. This person is wacko! She’s wacko!”

On the same program, Harkin said Christian broadcasters are “sort of our home-grown Taliban.” He added: “They have a direct line to God. And if you don’t tune into their line, you’re obviously on Satan’s line.”

Captain Ed over at Captains Quarter’s has Harkin: Christian Broadcasters ‘Our Taliban’:

Thus goes the Democratic outreach to the Christian community. In fact, Harkin and Howard Dean have defined a new era in party-building for the Democrats, where any display of faith makes someone a “wacko”, and the equivalent of Islamic lunatics that beat men for flying kites and women for displaying their ankles. If Tom Harkin can’t tell the difference between James Dobson and Mullah Omar, then Iowans should check his corn to see what he’s been using for fertilizer.

Their fear and distaste for Christians borders on bigotry — and yet the media eats it up. Christians and other people of faith are increasingly repelled by this rhetoric, and hopefully will remember it when the Democrats claim at election time that they respect faith. If they did, they wouldn’t compare Christians to Islamofascist terrorists.

Biogtry against Christians is what Flap calls it.

Will this be the extraordinary circumstance exclusion for the next judicial appointee? 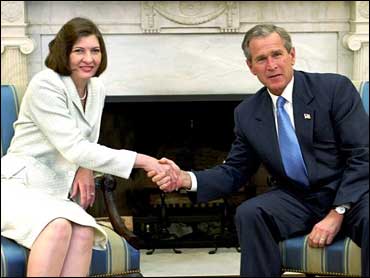