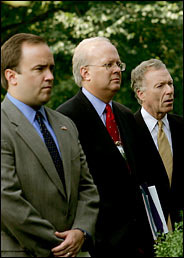 The sharks are circling and the teeth are bared (thanks Laura Ingraham) and who are they circling? Who is in the Shark tank? – why Karl Rove of course.

Now, the New York Times whines in this piece, At White House, a Day of Silence on Rove’s Role in C.I.A. Leak.

Nearly two years after stating that any administration official found to have been involved in leaking the name of an undercover C.I.A. officer would be fired, and assuring that Karl Rove and other senior aides to President Bush had nothing to do with the disclosure, the White House on Monday refused to answer any questions about new evidence of Mr. Rove’s role in the matter.

With the White House silent, Democrats rushed in, demanding that the administration provide a full account of any involvement by Mr. Rove, one of the president’s closest advisers, turning up the political heat in the case and leaving some Republicans worried about the possible effects on Mr. Bush’s second-term agenda.

Senator Harry Reid of Nevada, the Democratic leader, cited Mr. Bush’s statements about firing anyone involved in the leak and said, “I trust they will follow through on this pledge.”

Senator Charles E. Schumer, Democrat of New York, said Mr. Rove, given his stature and the principles involved in the case, could not hide behind legal advice not to comment.

“The lesson of history for George Bush and Karl Rove is that the best way to help themselves is to bring out all the facts, on their own, quickly,” Mr. Schumer said, citing the second-term scandals that have beset previous administrations.

The Sharks smell blood in the water and since they could not beat Rove at the polls, but a scandel (even if contrived) works for them. Besides, it is a slow news summer in Washington and the President has not named his SCOTUS nomination yet.

In two contentious news briefings, the White House press secretary, Scott McClellan, would not directly address any of a barrage of questions about Mr. Rove’s involvement, a day after new evidence suggested that Mr. Rove had discussed the C.I.A. officer with a reporter from Time magazine in July 2003 without identifying her by name.

Under often hostile questioning, Mr. McClellan repeatedly declined to say whether he stood behind his previous statements that Mr. Rove had played no role in the matter, saying he could not comment while a criminal investigation was under way. He brushed aside questions about whether the president would follow through on his pledge, repeated just over a year ago, to fire anyone in his administration found to have played a role in disclosing the officer’s identity. And he declined to say when Mr. Bush learned that Mr. Rove had mentioned the C.I.A. officer in his conversation with the Time reporter.

When one reporter, David Gregory of NBC News, said that it was “ridiculous” for the White House to dodge all questions about the issue and pointed out that Mr. McClellan had addressed the same issues in detail in the past, Mr. McClellan replied, “I’m well aware, like you, of what was previously said, and I will be glad to talk about it at the appropriate time.”

A moment later, Terry Moran of ABC News prefaced his question by saying Mr. McClellan was “in a bad spot here” because he had spoken from the same podium in the White House briefing room on Oct. 10, 2003, after the Justice Department began its formal investigation into the leak, and specifically said that neither Mr. Rove nor two other officials – Elliot Abrams, a national security aide, and I. Lewis Libby, Vice President Dick Cheney’s chief of staff – were involved.

Mr. McClellan disputed the characterization of the question but did not directly address why the White House had appeared now to have adopted a new policy of not commenting on the matter.

Karl Rove’s real problem is with the Grand Jury and the federal prosecutor Fitzpatrick.

If the New York Times wishes to contribute to the truth, release Judith Miller to reveal her source and end the suspense. How convenient the MSM enshrines Miller and her jailing for contempt and now encircles Rove in the Shark tank.

This is a tempest in a tea pot.

Captain Ed over at Captains Quarters has A Mystery That They Could Solve Today.

The only people engaging in a cover-up are the media — the New York Times and Robert Novak. When they want this mystery solved, they’ll tell us who leaked the name. Until then, they’ll milk this for everything it’s worth to embarrass an administration they dislike.

Michelle Malkin has a great round-up of sentiment, WHO LET THE DOGS OUT?

I actually have no problem with McClellan getting justifiably barked at during his daily briefings (if only we had more Les Kinsolvings to press the White House from the right, especially on illegal immigration). But isn’t it funny how Beltway reporters who get all prissy and whiny about one Fox News Channel reporter asking the DNC chairman one mildly aggressive question have no problem turning pack-rabid on McClellan?

Stephen Spruiell at the Media Blog raises another salient point:

Is [Judith] Miller refusing to testify because she herself outed Plame? Who knows? One thing is for sure: the press wants to have it both ways â€” attacking Scott McClellan today for not answering questions about Rove’s involvement, but reserving a place of honor for Miller, who has done more to obstruct the investigation of this incident than McClellan has. McClellan deserved the grilling he got today, but journalists deserve an equal grilling when they refuse to divulge information that the public has a right to know.

Lorie Byrd at Polipundit has a great takedown of the blow-dried boys, and notes that yesterday’s “questioning is disgraceful not because reporters beat Scott McClellan about the head over past statements. That is fair enough. What is disgraceful is todayâ€™s performance in the context of their past reporting on this matter, which has not accurately told the full story.” Read the whole thing.

The New York Times provides team coverage of the McClellan briefing. The most interesting stuff is, naturally, buried deep down in the last few grafs of the story:

The e-mail message from Mr. [Matthew] Cooper to his [Time] bureau chief describing a brief conversation with Mr. Rove, first reported in Newsweek, does not by itself establish that Mr. Rove knew Ms. Wilson’s covert status or that the government was taking measures to protect her.

Based on the e-mail message, Mr. Rove’s disclosures are not criminal, said Bruce S. Sanford, a Washington lawyer who helped write the law and submitted a brief on behalf of several news organizations concerning it to the appeals court hearing the case of Mr. Cooper and Judith Miller, a reporter for The New York Times. Ms. Miller has gone to jail rather than disclose her source.

“It is clear that Karl Rove’s conversation with Matt Cooper does not fall into that category” of criminal conduct, Mr. Sanford said. “That’s not ‘knowing.’ It doesn’t even come close.”

There has been some dispute, moreover, about just how secret a secret agent Ms. Wilson was.

“She had a desk job in Langley,” said Ms. Toensing, who also signed the supporting brief in the appeals court, referring to the C.I.A.’s headquarters. “When you want someone in deep cover, they don’t go back and forth to Langley.”

Danny Glover at Beltway Blogroll rounds up coverage on both sides.

John Podhoretz on the scandal implosion.

“…the media can rant all they want, but days when we are at war in Iraq, terrorists are bombing Londoners on the way to work, North Korea and Iran are inches away from getting nuclear bombs, and it’s summer and vacation time, I don’t think most people outside the Beltway and the political blogosphere care one jot about Karl Rove.

Indeed, this story will be quickly forgotten when the President names his nominee to SCOTUS.

The Left and the MSM needs to Move-On.