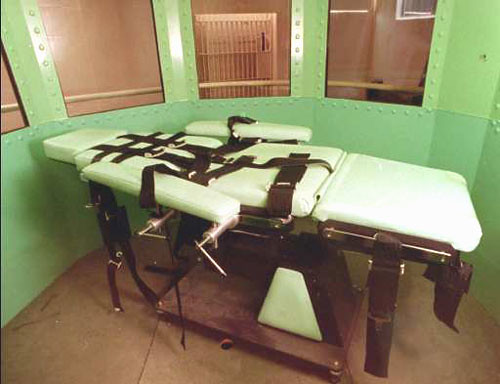 DEATH CHAMBER: The lethal injection table at San Quentin. The identity of the person who inserts the poison is not revealed.

The Los Angeles Times has Every Execution Detail Prescribed

Inmate movements, visitor rules, the mix of chemicals, the number of syringes: Nothing is left to chance. Wheels have started turning.

Barring clemency from the governor or a last-minute stay, Stanley Tookie Williams will be expected to walk on his own to the death chamber Monday at San Quentin State Prison.

If all goes according to procedure, Williams will not struggle as prison officers strap him to the injection table, connect the monitors that will record the final beats of his heart and insert the needles through which lethal chemicals will flow into his arms, once massive from lifting weights.

The death chamber will be equipped with 12 rolls of adhesive tape, 20 syringes, 10 needles, 15 tubes of varying sizes, four bags of saline solution, scissors, six tourniquets, two boxes of surgical gloves and one box each of surgical masks and alcohol wipes. There will be handcuffs and leg irons.

Nothing is left to chance. The choreography has been refined over the course of 11 executions at San Quentin since 1992 and hundreds before that. The smallest detail â€” including the dose and combination of chemicals that will sedate Williams, paralyze him and cause his death â€” is set forth in a 43-page document, San Quentin Operational Procedure No. 770.

But, just so the reader is not grossed out about these morbid details, Flap wants you to reflect on the damage done to the four victims of Tookie’s murderous assault over 25 years ago: 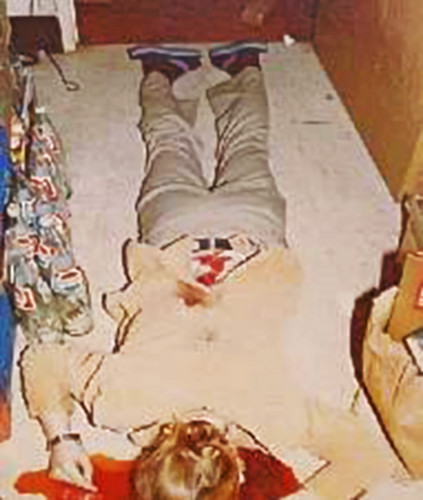 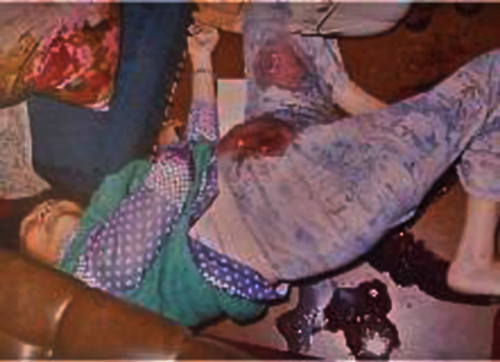 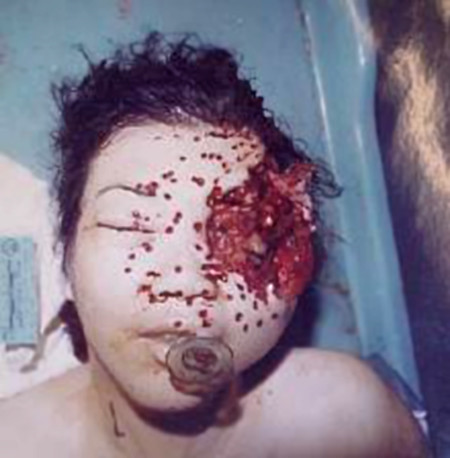 On the third day before an execution â€” today â€” the chamber will be closed to anyone not cleared by the warden. The lieutenant in charge of the chamber controls the keys.

The chamber is in a self-contained unit at San Quentin. It has two holding cells, in case two executions are scheduled for the same day. There is an officers’ area and a place for witnesses to stand. The unit is cleaned and sanitized daily.

On Sunday, the lieutenant must inventory the equipment and chemicals. Outdated items must be replaced immediately.

On Monday, the 5,500 inmates at San Quentin will stay locked in their cells.

Tookie will receive much better treatment towards his impending death than his victims. In a way it is dignifed in others it is ridiculously politically correct and sublime.

So far, Williams “has not agreed to be a part of any of the normal procedures,” said Department of Corrections and Rehabilitation spokesman Todd Slosek. The prisoner declined, for example, to specify whether he wanted to be executed by gas or injection. The default method is injection, Slosek said.

On Thursday, when procedure dictated that Williams’ belongings, including a toothbrush, be taken from his cell, he was “upset,” according to Slosek. Officers will return the items if he requests them, but he must give each back when he’s done with it.

Removal of such objects is “a security issue,” Slosek said.

Barbara Becnel, Williams’ close friend and confidant, said it’s a question of dignity; he must even give up his bedding when he wakes in the morning. And when she visited him Thursday, he was shackled, unlike on past visits.

Oh PLEASE…..what about the HARSH REALITY OF DEATH for his victims above.

Tookie has not redeemed himself – this is a BIG CON!

On Monday, one member of the execution team â€” whose identities remain secret under Procedure 770 â€” will take possession of the drugs needed to perform it, until the substances are needed or returned unused.

Officers will test the phone lines that run from the execution chamber to the California Supreme Court and the state attorney general’s office. That’s in case a stay is granted, as it was in 1992, after Robert Alton Harris, the first person executed in California after a 25-year gap, had been strapped in the gas chamber.

On Monday, an escort team will strip-search and shackle the prisoner in his cell. Then “the inmate, wearing only underwear, is escorted to the holding cell, where he is retained pending an unclothed body search, which includes a metal detector scan,” says Procedure 770.

The prisoner receives new clothes: undershirt, shorts, socks, blue jeans, blue shirt and canvas slippers. Once clothed and placed back in restraints, the inmate is walked to the elevator and rides down six tiers, to the death-watch cell.

The cell has a bed and mattress, blanket, pillow, heater, radio, television, three sets of state-issued clothes, towels and a chess and checkers set. A lieutenant will tell the inmate that dinner is served at 6 p.m., and introduces the sergeant and two officers who will stand watch throughout Monday evening.

Valium or another relaxant will be available if the inmate requests it and health authorities approve.

The condemned inmate is also allowed “reasonable last requests,” including special food and a choice of radio or television programs. Some inmates refuse last meals; Williams had not ordered one as of Friday.

Visits to Williams will have ended, but the inmate’s attorney can call, and a spiritual advisor, if Williams wants one, can stay with him until 45 minutes before the execution.

The warden will arrive, speak briefly with Williams â€” perhaps hearing his last words â€” and direct that witnesses take their places.

There is space for 50 witnesses, whose identities the prison does not reveal. Among them may be five witnesses and two spiritual advisors chosen by the inmate, victims’ family members and reporters. Williams has not requested that any of his own family members or close friends be permitted to witness his execution, should it occur.

If it does, Williams will walk to the death chamber once witnesses are in place. The execution team will strap him to a gurney and connect him intravenously to two bags of saline solution. No member of the San Quentin staff may address team members by name or ask them anything that would require an oral response.

After a final time check, Warden Steven Ornoski will order that the flow of saline cease and be replaced with lethal agents: first, the sedative sodium pentothal, then potassium chloride to paralyze Williams and, finally, pancuronium bromide to stop his heart.

The identity of the person who has inserted the poison will not be revealed. The infusion will continue until the prison doctor pronounces Williams dead. The execution chamber will be shut with a curtain.

“The body shall be removed with care and dignity and placed in a body bag,” says Procedure 770. “The chamber should then be cleaned thoroughly.”

In the meantime at San Quentin:

Stanley â€œTookieâ€ Williams Watch: Clemency Hearing to Include Claim there were Errors in Trial

Stanley â€œTookieâ€ Williams Watch: Isnâ€™t it The Truth By Cobb

Please Vote for FullosseousFlap at the 2005 Weblog Awards.