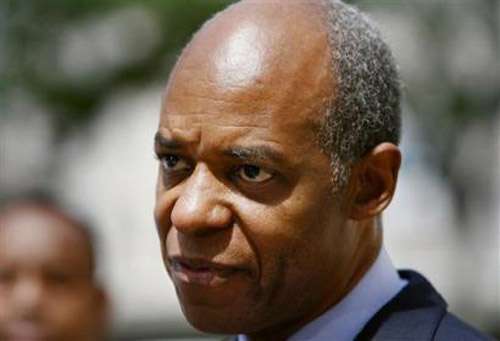 A congressman under investigation for bribery was caught on videotape accepting $100,000 in $100 bills from an FBI informant whose conversations with the lawmaker also were recorded, according to a court document released Sunday. Agents later found the cash hidden in his freezer.

And the Democrats complain about Randy Duke Cunningham. People that live in glass houses….

U.S. Rep. William Jefferson, D-New Orleans, speaks to the media at a news conference in New Orleans on Monday May 15, 2006. Congressman Jefferson declared his innocence in light of a federal bribery probe

At one audiotaped meeting, Rep. William Jefferson, D-La., chuckles about writing in code to keep secret what the government contends was his corrupt role in getting his children a cut of a communications company’s deal for work in Africa.

As Jefferson and the informant passed notes about what percentage the lawmaker’s family might receive, the congressman “began laughing and said, ‘All these damn notes we’re writing to each other as if we’re talking, as if the FBI is watching,'” according to the affidavit.

Jefferson, who represents New Orleans, has not been charged and denies any wrongdoing.

As for the $100,000, the government says Jefferson got the money in a leather briefcase last July 30 at the Ritz-Carlton hotel in Arlington. The plan was for the lawmaker to use the cash to bribe a high-ranking Nigerian official _ the name is blacked out in the court document _ to ensure the success of a business deal in that country, the affidavit said.

All but $10,000 was recovered on Aug. 3 when the FBI searched Jefferson’s home in Washington. The money was stuffed in his freezer, wrapped in $10,000 packs and concealed in food containers and aluminum foil.

Jefferson and Cunningham can cuddle with bubba together – the crooks.

FBI agents load the back of a minivan at the Rayburn House Office Building ‘horseshoe’ entrance on Sunday, May 21, 2006 on Capitol Hill in Washington. To the right of the frame are members of the U.S. Capitol Police. Saturday evening, May 20, 2006 and into Sunday, May 21, 2006 agents from the FBI searched the offices of Rep. William Jefferson, D-La.