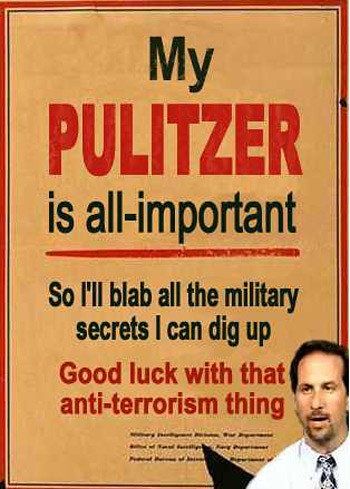 Eric Lichtblau, one of two New York Times’ reporters who broke today’s story of a secret government monitoring of private banking records – which the Bush Administration sought to block – said the White House arguments to halt the story were not as strong as those
that had kept a previous report on secret wiretapping out of the paper for a year.
“They were similar in terms of the objections raised not to publish,” Lichtblau told E&P today. “That the bad guys knew we were listening to them, but they don’t know exactly how.” But he
said the objections “did not rise to as high a level as last time.”

And so this was an “EXCUSE” for revealing national security secrets?  Or was it a rationalization for your hopeful Pulitzer Prize nomination as a result of your treasonous and anti-American expose?

Or was it because President Bush wasn’t directly involved that this “secret program” merited an “outing”?  And didn’t give you HIS personal disdain?

Lichtblau, who co-wrote both stories with Times reporter James Risen, said that in each case the newspaper believed that the information it was reporting would not put anyone in harm’s
way. “I think we came down on the same side in both questions,” he said of the two stories. “That this is not giving away information that is tangibly helping terrorists know what they don’t already know.”

Lichtblau, you have no idea what potential harm or deaths you may have caused with writing and publishing this piece.

You, Risen and Keller could give a DAMN as long as you published a “scoop” and served your own parochial needs – certainly needs above American interests.

Flap asks you, Lichtblau, how many Americans have to die? 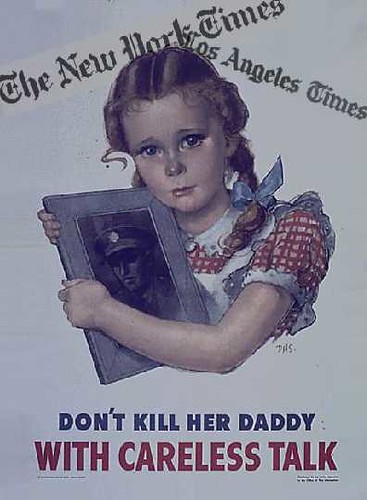 The national security cannot possibly come before the race for the next Pulitzer:

“I don’t think we could reasonably be accused of moving too quickly,” he said. “We waited so long that the competition caught up to us.” This comment referred to the Los Angeles Times’ posting a story about the bank records program on its Web site last night.