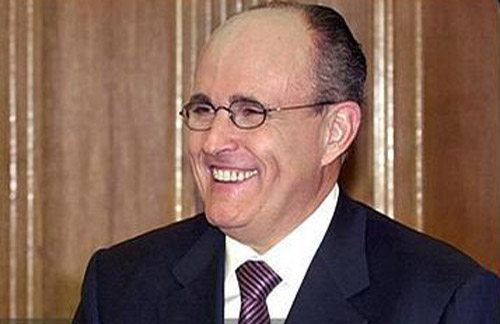 Well-connected public figures report that they have been told recently by Rudolph Giuliani that, as of now, he intends to run for the Republican presidential nomination in 2008.

And he will beat John McCain and then Hillary.

But, Captain Ed and his commenters have reservations because of his position on three bell-weather conservative issues:

Novak mentioned that 1 of 3 would have to be modified for Rudy to be palatable to the RIGHT.

The former mayor of New York was on top of last month’s national Gallup poll measuring presidential preferences by registered Republicans, with 29 percent. Sen. John McCain’s 24 percent was second, with former House Speaker Newt Gingrich third at 8 percent. National polls all year have shown Giuliani running either first or second to McCain, with the rest of the presidential possibilities far behind.

Republican insiders respond to these numbers by saying rank-and-file GOP voters will abandon Giuliani once they realize his position on abortion, gay rights and gun control. Party strategists calculate that if he actually runs, he must change on at least one of these issues.

Flap does not think these big three issues will be much in play in 2008. They may play well in television commercials that John McCain will run against Rudy but I do not think they will stick. Giuliani’s competence and standing will be too great for McCain’s gutter attacks. And…….

Abortion will be kicked to the states by SCOTUS.

No one is talking about confiscating or regulating firearms.

The HOT issues will be:

In the end, though, if the race came down to these two men, McCain would likely beat Giuliani in the primaries, because the base will not turn a blind eye to someone who opposes so many of their key positions — even if he has earned the admiration and respect of all involved. Fortunately for the GOP, we expect to see many more candidates throw their hat into the ring, such as George Allen and others who give conservatives a real choice in the primaries.

Somehow Flap does not see McCain beating Giuliani. Why?

1. McCain would never win in New York or California.

2. McCain appears old and is old,

3. McCain touts himself as a “maverick” and NOBODY trusts him.

George Allen will be a good vice president candidate.

Forget the rest…..either too much baggage (Gingrich) or too little name identification (Romney, First)

Suppose Giuliani actually stands by his views and the Republican Party – enough of it anyway – moves toward him and he actually gets the nomination without altering those positions. [I just saw Novak reaching for his beta blockers.-ed. Make sure he gets proper attention.] It would certainly make things easier for the Republicans in the general election with a candidate (the hero of 9/11) outflanking the Dems in almost every important direction. And the public would get what it seems to want – someone socially liberal but strong on defense. That would constitute a sea change in American politics. Of course, I could be a dreamer, as someone once said. But I’m not the only one. (via Glenn)

Most voters do not impose litmus tests on their candidates but vote on their “feel” or instincts. All of the early polls say voters trust Giuliani.Â  This election will be Rudy’s to lose.
Previous: