Today is National Methamphetamine Awareness Day — the first time a president has designated a day to focus national attention on methamphetamine, an extremely destructive and harmful drug.

For parents, today is a reminder of the importance of talking to our children about dangerous drugs. For our youth, it is an opportunity to reaffirm a commitment to a drug-free future. For those struggling with addiction, it is an occasion to seek treatment. And for all Americans, it is an opportunity to thank law enforcement officers, treatment counselors and prevention advocates whose efforts have contributed to a nearly 20 percent decline in drug use among American youth over the past four years.

Today is also an occasion to reflect on the progress our nation has made in attacking methamphetamine. In 2005, the number of methamphetamine laboratory incidents in America declined by 29 percent from the previous year and is continuing to decline this year. And there is more good news: Methamphetamine use among youths is down 36 percent (from 2001 to 2005), and positive tests for meth in the workplace have declined 45 percent since 2004. In short, fewer people are making meth in America, and fewer people are using it.

This good news is proof that a balanced drug control strategy can yield meaningful results. But our fight against methamphetamine is not over. Earlier this year, the administration released the nation’s first Synthetic Drug Control Strategy, a coordinated effort among government institutions at the federal, state and local levels that sets ambitious goals for America. The strategy calls for an additional 25 percent reduction in domestic methamphetamine laboratories (beyond the 29 percent reduction already seen last year), and a 15 percent reduction in methamphetamine use, both by the end of 2008. Again, the good news is that we are on track to meet these goals, with past year methamphetamine use declining 29 percent over the prior three years, and steady declines in the number of meth labs across our nation.

Meanwhile, we know that simply reducing the supply of methamphetamine is not enough. We also must reduce the demand for the drug. This means offering treatment opportunities to help heal those who are addicted. It means stopping use of methamphetamine before it starts by supporting the most effective drug-prevention initiatives — especially those aimed at youth. That is why the president has requested that Congress provide historic levels of support for drug programs.

As our nation reflects on the progress we have made and the challenges that remain in reducing methamphetamine use, all Americans, especially our youth, should reaffirm their commitment to a drug-free future. The devastating effects of using any illicit drug — on the individual, family and community — cannot be overstated.

John Walters is director of the White House Office of National Drug Control Policy. For more information on methamphetamine, and how to help stop its spread, visit www.methresources.gov or www.usdoj.gov/methawareness/.

Flap does not normally reprint whole pieces but I am sure The Oregonian will not mind on Methamphetamine Awareness Day.

A US Sheriff holds two examples of methamphetamine taken on a bust. The profoundly addictive synthetic drug methamphetamine has become a â€œglobal threatâ€, topping cocaine and heroine use combined, US authorities said.

The Oregonians excellent investigative series the Unnecessary Epidemic is here.

And the dental effects I see on a weekly basis: 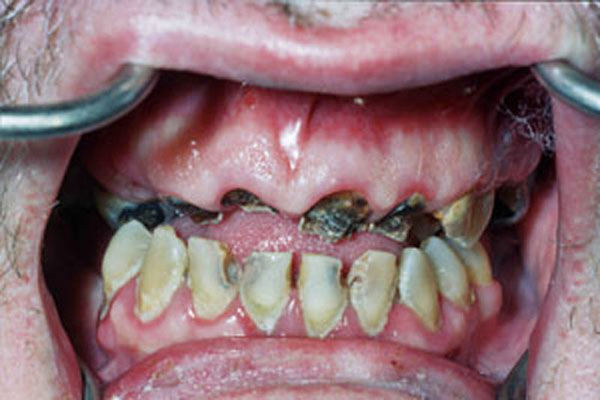 There is much more work to do.