Rudy Giuliani, left, and his wife Judith Nathan visit the casket of former President Gerald Ford in the Rotunda of the U.S. Capitol, Monday, Jan. 1, 2007, in Washington.

AP: Giuliani campaign strategy is out

The presidential campaign strategy for former New York Mayor Rudy Giuliani â€” complete with a $100 million fundraising target for this year â€” is out of the bag.

The 140-page schedule for the Republican’s budding presidential bid was reported in Tuesday’s editions of the New York Daily News.

Apparently the campaign strategy 140 page briefing book was stolen from the Giuliani campaign.

The paper said an anonymous source obtained the document after it was left behind on a campaign swing in 2006, but Giuliani spokeswoman Sunny Mindel claimed it was actually pilfered from luggage from a private flight.

“This wasn’t left in a hotel,” Mindel told The Associated Press. “This is clearly a dirty trick. The voters are sick and tired of this kind of thing.”

Mindel said that while working on the 2006 campaign trail, a Giuliani aide lost a piece of luggage containing the paper.

“After repeated requests over the course of a few days, the bag was finally returned with the document inside. Because our staffer had custody of this document at all times except for this one occasion, it is clear that the document was removed from the luggage and photocopied,” she said.

She did not say exactly where or when the strategy paper was lost, or what was in it, but Mindel played down its importance, saying it is “simply someone’s ideas which were committed to paper over three months ago.”

So, is this a dirty trick?

Hugh Hewitt discussed/reminded the blogosphere about this type of Black Blog Ops the other day. Was it a premonition of 2008 campaign “dirty tricks” to come?

Or will someone surmise/pontificate it was a willfull Giuliani campaign leak to trial balloon the Mayor’s campaign weaknesses?

The Giuliani campaign will have to keep closer track of internal campaign documents. As far as the content of the campaign playbook:

It’s no secret that Rudy Giuliani’s personal life could cause him trouble in a 2008 presidential bid, but now that the former New York mayor’s game plan has been laid out in a newspaper for all to see, it is clear he is worried his past may do him in. A realistic appraisal wouldn’t one say?

And there is also no secret that Presidential campaigns must raise millions of dollars to fund media campaigns and a national campaign operation.

The Presidential campaign of 2008 is reminding Flap of the Cold War.

Discuss this blog post and MOREâ€¦. at the FullosseousFlapâ€™s Dental Blogs Discussion Forums, My Dental Forum. 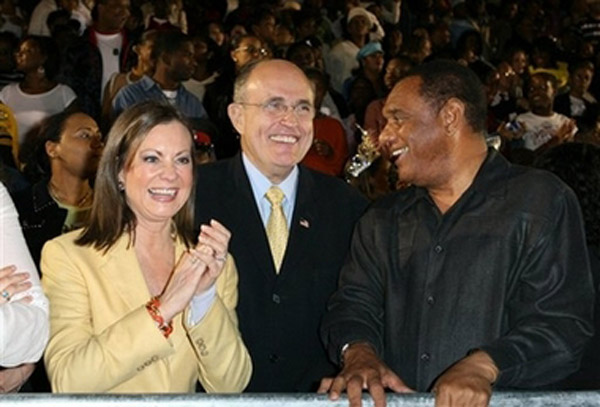 Former New York Mayor Rudy Giuliani and his wife Judith enjoy the festivities, along with Bahamian Prime Minister Perry G. Christie, right, at the Boxing Day Junkanoo parade in downtown Nassau in the Bahamas on Wednesday, Dec. 27, 2006. This marks Giuliani’s first trip to the Bahamas while his wife has visited previously.