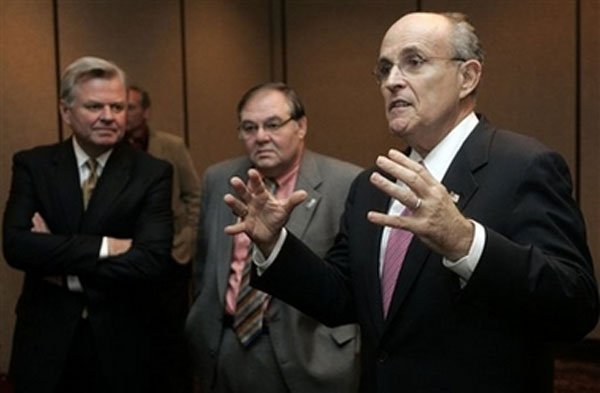 Former New York City Mayor Rudy Giuliani makes a point as he speaks with reporters in New London, Conn., Tuesday, Jan. 9, 2007. Giuliani was speaking about safety considerations in regard to the proposed construction of a liquid natural gas facility in the middle of Long Island Sound between Connecticut and New York state. Giuliani’s security firm has been hired to study the situation. From left are: Tom von Essen, Richard Sheirer and Giuliani. Von Essen and Sheirer are associates of Giuliani’s.

The Hotline (Via The Corner): Rudy Supports The Troop Increase

â€œSuccess or failure in Iraq is not a matter of partisan politics but a matter of national security. All Americans should be hoping, praying and offering constructive advice for the success of our troops in Iraq and for those Iraqis seeking to create a stable and decent government. In that spirit, I support the Presidentâ€™s increase in troops. Even more importantly â€“ I support the change in strategy â€“ the focus on security and the emphasis on a political and economic solution as being even more important than a military solution.I would add to it a heavy emphasis on measuring results and having the flexibility of adapting our strategy to make certain we restore security as quickly as possible.

We must not wait for a year or more to measure the success of our strategy but must develop a system to do so monthly weekly even daily so we give our troops the necessary support to succeed.â€

Hillary Clinton opposes the increase in troops. And so does Barack.

Flap caught the Mayor on Fox News after President Bush’s speech last night and he looked very presidential. Rudy made his points clearly and distinctly without any hesitation.

Giuliani will EAT Hillary alive in any debate…..