The two Republicans met recently at Giuliani’s request in his New York office to plot conferences with members of Congress who have shown interest or support in his White House bid, said Fossella, a Staten Island and Brooklyn official.

He wants to be able to come and meet members of Congress to take his message here,” Fossella said. “Frankly, I gladly said I would help. Rudy did a great job, and on the whole, he has a great, compelling story to tell.”

The congressman is working with Reps. Peter King of Long Island and Peter Sessions of Texas in acting as a congressional liaison for Giuliani, who sprang to popularity in New York City and nationwide after Sept. 11, when his leadership earned him the nickname “America’s Mayor.”

Fossella, who worked alongside Giuliani when he served as a South Shore city councilman, credited the former mayor with reducing crime. During his tenure, from 1994 to 2001, Giuliani supported a “broken windows” approach to policing, which revolved around targeting petty crime — squeegee men, for example — as a way to prevent future instances of more serious vandalism and violence.

Fossella also lauded Giuliani for paying attention to the Island, whose residents often feel like stepchildren of the bustling city.

“Vito Fossella has a strong record of accomplishment and we are grateful for his support. He is a great addition to our team,” said Mike DuHaime, executive director of Giuliani’s presidential exploratory committee.

Some critics have questioned the seriousness of Giuliani’s presidential ambitions, and New York State Conservative Party Chairman Mike Long was quoted as saying he does not believe Giuliani is running. But Fossella said he believes the former mayor is “very serious.”

Of course, the Mayor is SERIOUS.

The campaign continues in New Hampshire with events beginning tomorrow.

The former mayor is delivering the keynote address at the state GOP committee’s annual meeting Saturday in Manchester, an event that officials expect to draw nearly 500 party leaders from around the state. Mr. Giuliani is also venturing up to New Hampshire’s north country tomorrow night to speak to local business leaders at a sold-out Chamber of Commerce dinner in Littleton.

More from the Granite State:

WORKING THE CROWD. A healthy dose of Presidential politicking will surround that state committee meeting.

It’s an important stop in an important weekend for Rudy. He arrives Friday night. After a private meeting with Berlin Mayor Bob Danderson, he appears at a sold-out Littleton Chamber of Commerce dinner at the Mount Washington Hotel. 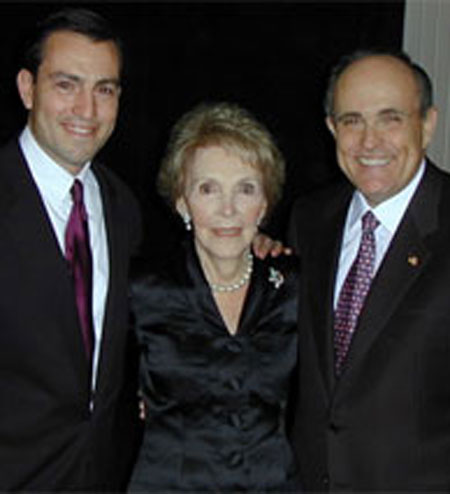 Rudy Giuliani Watch: In or Out?