Potential presidential candidate and former New York Mayor, Rudy Giuliani, offers specific plans how deal with security in Iraq during an interview on NBÂ© T0day Sh0w yesterday. The host forced Giuliani to defend his credentials on Iraq asking, “What does a mayor know about Iraq?”

Not since Teddy Roosevelt took on Tammany Hall a century ago has a New York politician closely linked to urban reform looked like presidential timber. But today exâ€“New York mayor Rudy Giuliani sits at or near the top of virtually every poll of potential 2008 presidential candidates. Already, Giulianiâ€™s popularity has set off a â€œstop Rudyâ€ movement among cultural conservatives, who object to his three marriages and his support for abortion rights, gay unions, and curbs on gun ownership. Some social conservatives even dismiss his achievement in reviving New York before 9/11. An August story on the website Right Wing News, for instance, claims that Giuliani governed Gotham from â€œleft of center.â€ Similarly, conservatives have been feeding the press a misleading collection of quotations by and about Giuliani, on tax policy and school choice issues, assembled to make him look like a liberal.

It would be a mistake for conservatives to turn their back on Rudy Giuliani and to dismiss him as a Lib. Certainly, the GOP and specifically the California GOP has supported candidates that are not RIGHT on social conservative litmus tests.

However, there is more to the presidency than proclaiming that abortion, gays and guns are bad, bad, and good. Look at Ronald Reagan. Did you ever see him place emphasis on these three litmus test issues, when he was in Sacramento or Washington?

And how much change did Reagan affect in social mores, in any case?

Reagan as Giuliani wants government off the back of cultrual and religious conservatives and demonstrates this by executive action and competence not platitudes and promises – mostly unfulfilled.

As â€œAmericaâ€™s mayor,â€ a sobriquet he earned after 9/11, Giuliani has a unique profile as a presidential candidate. To engineer the cityâ€™s turnaround, he had to take on a government whose budget and workforce were larger than all but five or six states. (Indeed, his budget his first year as mayor was about ten times the size of the one that Bill Clinton managed in his last year as governor of Arkansas.) For more than a decade, the city has been among the biggest U.S. tourist destinations, and tens of millions of Americans have seen firsthand the dramatic changes he wrought in Gotham.

Moreover, as an expert on policing and Americaâ€™s key leader on 9/11, Giuliani is an authority on todayâ€™s crucial foreign policy issue, the war on terror. In fact, as a federal prosecutor in New York, he investigated and prosecuted major terrorist cases. As mayor, he took the high moral ground in the terrorism debate in 1995, when he had an uninvited Yasser Arafat expelled from city-sponsored celebrations during the United Nationsâ€™ 50th anniversary because, in Giulianiâ€™s eyes, Arafat was a terrorist, not a world leader. â€œWhen weâ€™re having a party and a celebration, I would rather not have someone who has been implicated in the murders of Americans there, if I have the discretion not to have him there,â€ Giuliani said at the time.

These are impressive conservative credentials. And if social and religious conservatives fret about Giulianiâ€™s more liberal social views, nevertheless, in the general election such views might make this experience-tested conservative even more electable.

The case is made for the Giuliani presidential candidacy.

The question Flap has for conservatives:

Do you REALLY think John McCain or Mitt Romney can beat Hillary Clinton?

Are you willing to roll the dice?

Captain Ed has The Conservatism Of Rudy Giuliani

Given his history of turnaround in New York, his executive experience outweighs anything offered by Mitt Romney and especially John McCain. Whatever his positions, he has proven himself more consistent in them than both men, although in Romney’s case, his vacillations seem a little oversold. Romney has proven his leadership skills in the Olympics and in one term as Governor of Massachussetts, but Giuliani is a man who governed eight million people for two terms and helped rescue the city when hit by the worst attack on American soil since Pearl Harbor.

That itsn’t to say that his positions aren’t problematic. He has been consistently pro-choice, and like many prosecutors, supports gun-control legislation. Those positions rightly make conservatives worry about what a President Giuliani would do once in office. However, he has also consistently spoken against judicial activism, and as a former federal prosecutor, knows first-hand the damage it does. Giuliani has promised to appoint judicial constructionists to the federal bench, the kind not likely to impose abortion or gun policy from their unchecked positions.

Conservatives should reconsider Giuliani. Of all the candidates in the race thus far, he has the best track record of implementing conservative governance consistently and successfully. Read the rest of the article for an in-depth history of Rudy’s tenure as mayor. (via Power Line)

Conservatives should get behind America’s Mayor. Let’s end the partisan bickering and move forward to beating Hillary Clinton and the LEFT next year.

Of course, Rudy choosing Newt Gingrich as his running mate would not be a bad idea either. 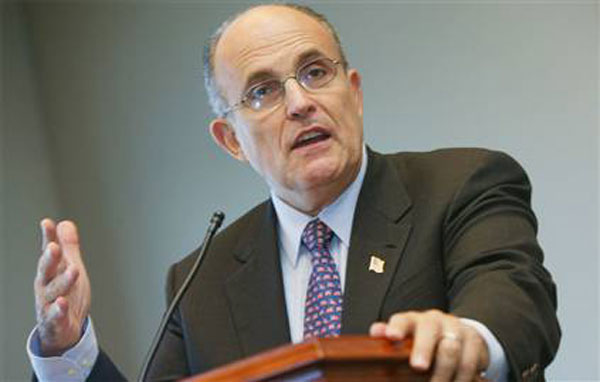 Rudy Giuliani Watch: In or Out?

One thought on “Rudy Giuliani Watch: What Does a Mayor Know About Iraq?”