Senator from Massachusetts, USA, John Kerry, seen on the large screen, speaks during a session ‘The Future of the Middle East’ at the World Economic Forum in Davos, Switzerland, Saturday Jan. 27, 2007.

Massachusetts Sen. John Kerry slammed the foreign policy of the Bush administration on Friday, saying it has caused the United States to become “a sort of international pariah.”

The statement came as the 2004 Democratic presidential nominee responded to a question about whether the U.S. government had failed to adequately engage Iran’s government before the election of hard-liner Mahmoud Ahmadinejad in 2005.

Kerry said the Bush administration has failed to adequately address a number of foreign policy issues.

“When we walk away from global warming, Kyoto, when we are irresponsibly slow in moving toward AIDS in Africa, when we don’t advance and live up to our own rhetoric and standards, we set a terrible message of duplicity and hypocrisy,” Kerry said.

“So we have a crisis of confidence in the Middle East – in the world, really. I’ve never seen our country as isolated, as much as a sort of international pariah for a number of reasons as it is today.”

The age-old dictum that United States politicians while on foreign soil do not criticize the President or United States government has been violated frequently lately. But, this comment by Senator John Kerry today is about as MORONIC of a statement from an american politico that Flap has ever heard.

Glenn Reynolds: “JOHN KERRY does it again. Like Jimmy Carter, he’ll never forgive America for rejecting him, and he’ll console himself with the approval of America’s enemies.”

However, Flap think it is deeper and goes back further than the 2004 Presidential election.  John Kerry has hated America that he cannot control since the Vietnam War.  John Kerry has definite CONTROL issues and if he does NOT get his way then he throws a tantrum.  Witness today.

Senator from Massachusetts, USA, John Kerry gestures while speaking during a session ‘The Future of the Middle East’ at the World Economic Forum in Davos, Switzerland, Saturday Jan. 27, 2007. Kerry criticized the Bush administration’s foreign policy during the session, saying it has caused the United States to become ‘a sort of international pariah.’

And what do America’s enemies think?

My gosh, if you have a disagreement with American policy just foster some dissent because some AMERICAN MORON or POLITICIAN will undermine their own country.

Does anyone think that Senator “BOTCHED JOKE” Kerry will be re-elected in Massachuseltts in 2008?

Former President of Iran Mohammad Khatami, left, and Senator from Massachusetts, USA, John Kerry take the stage for a session ‘The Future of the Middle East’ at the World Economic Forum in Davos, Switzerland.

John Kerry Watch: â€œLonelyâ€ Photo a Hoax? No – An Off the Record Conversation

John Kerry Watch: The â€œRepublican Attack Machineâ€ Is Out to Get Me!

John Kerry Watch: â€œWe Support Those Not As Smart as John Kerryâ€ 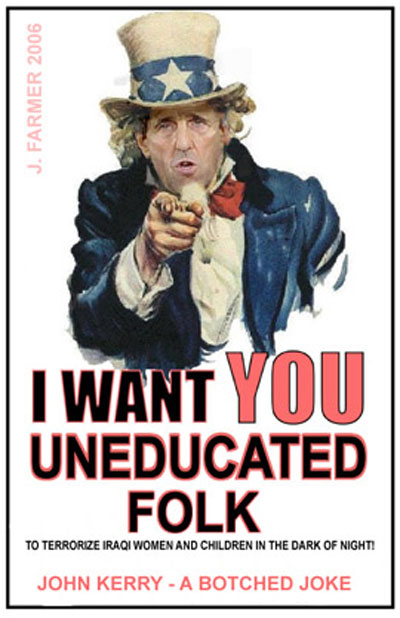