From Brent Seaborn, the Giuliani campaign’s Director of Strategy:

Growth in Mayor Giulianiâ€™s Ballot Strength
In early 2007, some people said that Mayor Giuliani would not run for President. On February 5th, Mayor Giuliani filed his FEC paperwork and legally declared himself a candidate for the Presidency. He ended this momentous day with an appearance on Hannity and Colmes.Since the Mayor made his intention to run for President clear, we have seen notable growth in support for our campaign. Before February, 5th, we were leading in major media polls by an average of 5-points. Since February, 5th our lead has grown to an average of nearly 20-points.

The Mayor is Better Known to Conservatives than Some will Acknowledge
Many columnists and pundits question what will happen when Republicans “find out about the Mayorâ€™s views on social issues.” Many of these stories are being generated by the same people that speculated that Mayor Giuliani would never run for President. Over the course of the last month, that question has been dispelled.A recent Newsweek poll shows Mayor Giuliani with a 25-point lead among Republican and Republican leaning voters and a 30-point lead among social conservatives. Mayor Giuliani has a wider lead among social conservatives than he does among Republicans in general. Social conservatives already know who Rudy Giuliani is. In fact, more than 70% say they know “some or a lot” about him – these numbers are almost identical or better than other candidates in the race.

After reviewing other data, I have found similar evidence.

Another interesting point, about two-thirds of “very conservative” Republican primary voters consider Mayor Giuliani to be a moderate or a liberal. Yet even with these voters, Mayor Giuliani holds a 5-point lead over his nearest competitor.

There are, of course, some voters that will never vote for Mayor Giuliani, and we know that we will see polls tighten. But the “when voters find out about Rudyâ€™s record the sky will fall” notion is a myth.

Rudyâ€™s positions and record are already known among most Republican primary voters and are factored in to the current polling.

What We Can Expect
Discrediting the commitment of the Mayor to run for President did not work. Telling Republicans that the Mayorâ€™s positions on issues are unacceptable to primary voters does not work either.

As we have seen the next line of attack is aimed at discrediting the Mayorâ€™s character. This attack – while not surprising – should be treated for what it is – cheap and political.

We expect polls to tighten as we move in to spring – such is the nature of the political process. While we are realistic about our expectations going forward, we are also pleased with where we are today and are confident our current support among Republican primary voters is strong.

This memo parrots much of the information posted here as a result of a blogger conference call a few weeks ago.

Rudy is leading in the polls.

Next stop – how is the fundraising doing? 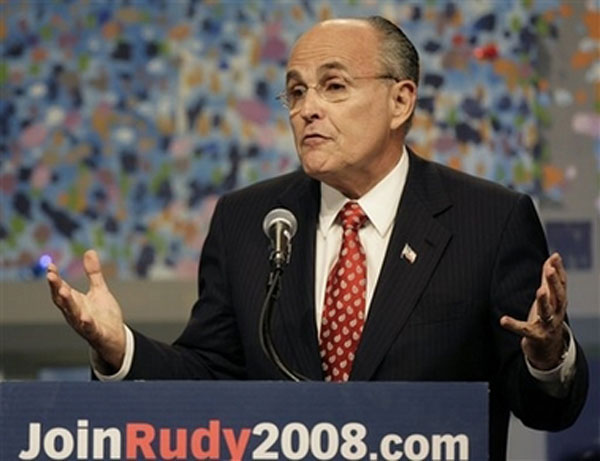