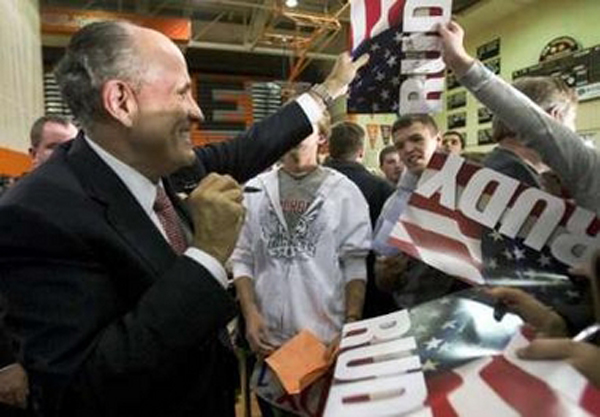 Rudy Giuliani will hold your baby, hug your dog, autograph your T-shirt and blow you a kiss. All in the space of 15 minutes.
I watch him do these things as he makes his way down Market Street in Charleston’s famed Historic District, which on this bright and warm spring day is packed with tourists.

They call his name — “Rudy! Rudy! Over here, Rudy!” — and take his picture and, though often lacking both paper and pen (he will provide both), they ask for his autograph.

He is glad to oblige. He is delighted to oblige. Thus far in the 2008 presidential race, Giuliani has opened up a clear enthusiasm gap. He actually seems to enjoy campaigning. (Even if he is faking it, most of the other candidates aren’t even bothering to do that.)

Flap has covered and videoed Rudy twice in California public campaign events and his enthusiasm is contagious. He WANTS to be the PEOPLE”S PRESIDENT.

Flap has seen many campaigns and politicians. He has seen the phoneys, the plastic candidates who are out for themselves. This is NOT Rudy.

Look at these videos taken in Iowa by Flap’s friend Kavon Nikrad over at race42008.com

Would you say that Rudy knows how to press the flesh and campaign among the people? Would you say these Iowa folks are enthusiastic for his candidacy?

Giuliani is selling competence, not ideology. He ran America’s largest city for eight years, and now he is ready to run America. That is his message.

Giuliani drops to one knee on the sidewalk and hugs a mixed collie named Maya as her owner snaps a picture of the two of them.

Then a young woman comes up to Giuliani and asks him to autograph the T-shirt she is wearing. Giuliani turns her around and signs the back of it. (He is no fool.)

“He is great,” says Khert, a registered Republican. “I don’t think the Democrats have anybody to run against him. He is really good in a crisis, and we are kind of in a crisis, aren’t we?”

But do you think he is a real conservative? I ask him.

“I don’t think we are looking for a real conservative Republican president,” Khert says. “We got one now. And how is that working out?”

Stay tuned for the Giuliani campaign to come to your state. But, arrive early – there will be a crowd.