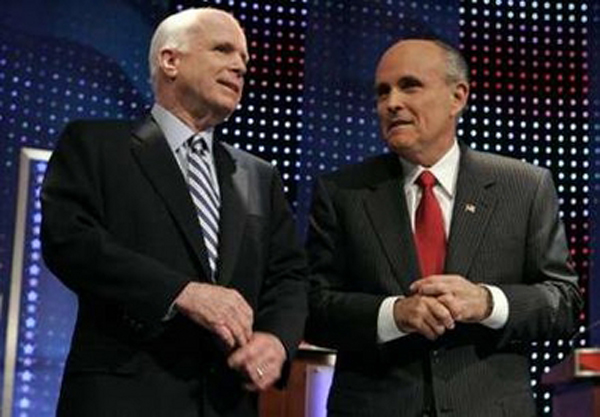 So, who won tonight’s debate?

Flap will wait for the polls. But, is there any doubt?

McCain and Romney were smacking each other and Rudy looked like a President and his throw down of Ron Paul begs to be seen again:

From the Giuliani campaign:

â€œTonight it was clear there was only one candidate on the stage ready to be President of the United States. Mayor Rudy Giulianiâ€™s command of the issues and unifying, optimistic vision for the future of this country stood out in stark contrast â€“ proving he is the strong leader these times demand. He will bring our Party and our country together to win the terroristsâ€™ war on us and keep our economy strong and growing.â€

Last time around, Romney won and Rudy lost; this time around, I’d say it was exactly the other way around, with McCain in the middle both times.

CBN’s David Brody: “No offense to Stella, but if I was going to title this debate, I would call it, “How Giuliani got his groove back.”

“Giuliani and McCain looked and acted like the frontrunners tonight. They got opportunities to look presidential and seized the moments. Romney, after a great first debate, turned in a very mediocre performance. Part of his problem were the surprisingly tough questions he received from his inquisitors which seemed to throw him off. But there was something about him that just seemed less present on stage tonight. Maybe it was because he wasn’t standing on the far left side of the stage, like
McCain this time and Romney was in the first debate.”

Team Rudy should send a hundred roses to Ron Paul — yellow roses, of course — after the Congressman essentially tossed the debate to Giuliani. Rudy had a pretty good night going anyway, but when Paul as much as said that the terrorists had a point in killing 3,000 Americans, Rudy let fly with the righteous indigation that an entire nation was busily hurling at their television screens.

Mayor Giuliani: â€œIâ€™ve Seen What Can Happen When You Make A Mistakeâ€ About Terrorism

Mayor Giuliani: â€œIn the hypothetical that you gave me, which assumes that we know that there’s going to be another attack and these people know about it, I would tell the people who had to do the interrogation to use every method they could think of. Shouldn’t be torture, but every method they can think of. â€¦ And I would support them in doing that, because I’ve seen what can happen when you make a mistake about this, and I don’t want to see another 3,000 people dead in New York or anyplace else.â€

Mayor Giuliani: The Worst Thing To Show Terrorists Is Weakness.

Giuliani: â€œThese people do want to follow us here and they have followed us here. Fort Dix happened a week ago. That was a situation in which six Islamic terrorists, who were not directed by Al Qaeda but claimed to have been inspired by them, were going to kill our military in cold blood at Fort Dix. It was a 16 month investigation done by the F.B.I. and United States Attorneyâ€™s office and thank God they caught them. But we have to remind ourselves that we are facing an enemy that is planning all over this world and it turns out planning inside our country to come here and kill us and the worst thing to do in the face of that is to show them weakness.â€

Mayor Giuliani: We Need To Identify Everyone In U.S. So We Can Find The Terrorists.

Mayor Giuliani: â€œThe reality is the focus on immigration should be to know everyone who is in the United States. We should have a tamper-proof ID card. We should have a database in which we can identify the people who are in this country. I know something about security. I think I have had more experience at having to secure a city, having to deal with security and the justice department than I would say anyone on this stage. And the reality is we have got to be sensible about immigration. If we do the kinds of things that some of the people here are talking about, this country is going to be in greater danger, itâ€™s going to be more insecure, we are going to face a situation in which terrorists, like the Fort Dix people, three of whom were illegal, can find a big underground to hide in. So, we need a fence, we need technological fence, we need tamper-proof ID card and we need a way that people who are working in this country can come forward, and sign up for the tamper proof ID card get in the database and start paying their way.â€