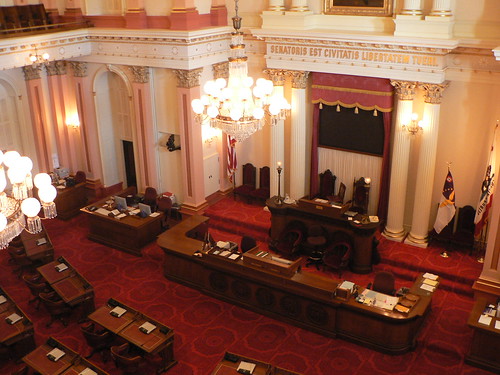 After a weekend of a continued California State Budget stalemate, the California Assembly and Senate are to meet this morning to again take up the matter.

Dan Walters at the Sacramento Bee has a good summary of the weekend’s machinations – which at the time of this posting seemingly has NO end in sight.

Even jaded veterans of the Capitol’s often bizarre internal politics had never seen anything quite like the weekend marathon over the biggest package of spending, spending cuts and taxes ever to hit the building â€“ a spectacle that’s still playing itself out with no end in sight.

The package was cobbled together by Gov. Arnold Schwarzenegger and four legislative leaders in weeks of private negotiations to close a $40 billion budget deficit over the next 16 months.

Legislators had just hours to absorb the dozens of bills, the most vital of which, under the state’s unusual voting rules, required two-thirds votes and therefore at least three Republicans in both legislative houses.

The outcome was never in doubt in the Assembly, whose GOP leader, Mike Villines, enjoys strong support among his colleagues. The issue has been the Senate’s 15-member, notoriously fragmented Republican contingent whose leader, Dave Cogdill, is always about one vote away from being dumped â€“ if anyone else would take the job.

Cogdill would vote for the package along with Bakersfield Sen. Roy Ashburn, but the third GOP senator was elusive throughout the weekend as speculation â€“ and outside pressure â€“ shifted from one senator to another.

If you readers wish to watch the proceedings via live video you can do so in two ways:

The latest rumor from the Capitol is that Senator Abel Maldonado is negotiating with Big 5 Legislative Leaders and Governor. He will provide the necessary vote to approve tax increases and the state budget in return for a vote on a spending cap initiative, plus a vote on a California Open Primary (Top 2 Washington Plan) election system on the May 19, 2009 special election (called to approve other budgetary enabling measures, including bonds for future lottery proceeds).

So, the question is: Will GOP Senator Abel Maldonado flip to the Democrats and Governor Schwarzenegger and sell out California taxpayers?