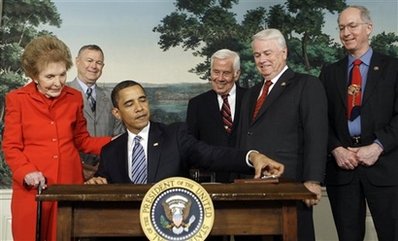 From the Press Release:

The Ronald Reagan Centennial Commission Act creates an 11-member commission that will plan and carry out activities deemed fitting to honor Ronald Reagan on his 100th birthday, which falls on Feb. 6, 2011.

The commission will make recommendations and provide necessary assistance for federal, state and local governmental agencies and civic groups to honor President Reaganâ€™s 100th birthday. Such activities could include special stamps or coins. In addition, the commission will recommend to Congress activities to honor President Reaganâ€™s 100th birthday, including the possible convening of a Joint Session of Congress.

No federal money can be spent on the commission or its activities.

â€œHaving Mrs. Reagan at the bill signing gave it special significance,â€ Gallegly said. â€œShe was President Reaganâ€™s staunchest supporter before, during and after his presidency. I appreciate that President Obama scheduled the ceremony so that she could attend.â€

Mrs. Reagan will also attend the unveiling of President Reaganâ€™s statue in the U.S. Capitol Rotunda on Wednesday.

Galleglyâ€™s bill attracted wide bipartisan support. The Senate passed the bill by unanimous consent on May 20 and the House passed it on a 371-19 vote on March 9. 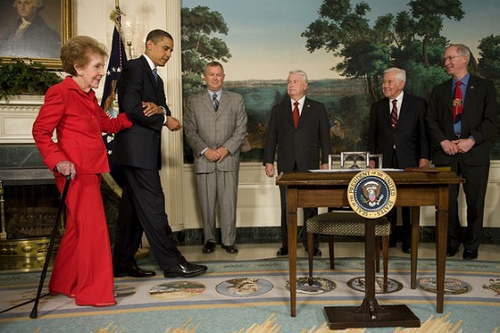 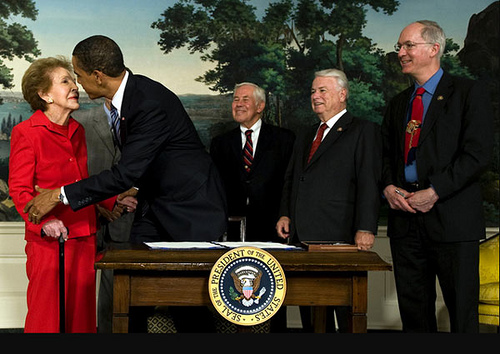 What a nice gesture by President Obama to honor President Ronald Reagan and have a White House bill signing ceremony for Nancy.

And, thanks to Flap’s Congressman Elton Gallegly for sponsoring the bill in the House.

Now, this is bipartisanship and makes me proud, especially since the Ronald Reagan Presidential Library and Museum is just a few miles from where I live. 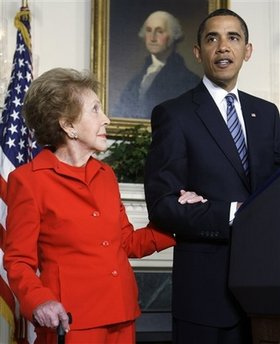