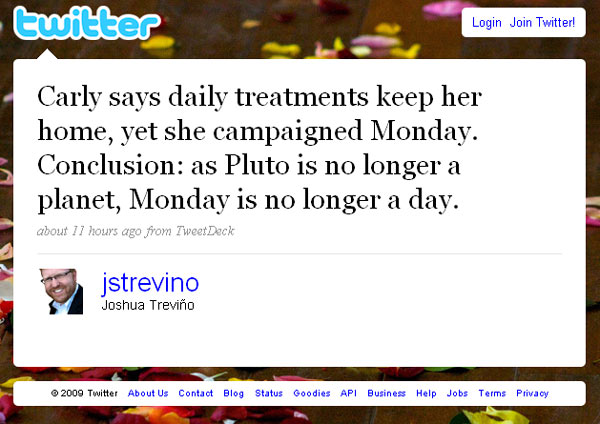 I saw this today on Twitter and really could not believe it. A spokesman and a paid one at that for California Republican Assemblyman and U.S. Senate candidate Chuck DeVore, Joshua Trevino,  mocking fellow Republican Carly Fiorina for not attending this past weekend’s California GOP Convention in Indian Wells.

James Richardson has the FLAP.


Citing the physical demands of her ongoing treatment for breast cancer, for which she was diagnosed last March, potential GOP Senate candidate Carly Fiorina said her schedule of radiation treatments would not permit her attendance at the convention.

But the DeVore campaign has noted that, while Fiorinaâ€™s health curiously precluded her from attending the party gathering, she spent much of the following Monday campaigning in Fresno with ranchers and participated via satellite in Fortuneâ€™s â€œMost Powerful Women Summit.â€

Laying the foundation for the belief that Fiorina is somehow casually exploiting her illness for the benefit of her campaign, State Assemblyman Chuck DeVore told The Fresno Bee he finds â€œit curious that her campaign said she was unable to make the convention for health reasons, and yet, â€¦ she was engaged in what appears to be a pretty standard, strenuous campaign day yesterday â€“ the day after the convention.â€

Indicative of his campaignâ€™s reliance on rumor-mongering of a particularly vicious and fatuous sort, DeVoreâ€™s critics say his campaignâ€™s latest assault on Fiorina is built on the notion that he can cobble together support among the GOP ranks by fostering the double-edged rumor that his opponent is too ill to campaign, too liberal to campaign for the Republican nomination â€“ or, perhaps, both.

â€œCarly says daily treatments keep her home, yet she campaigned Monday. Conclusion: as Pluto is no longer a planet, Monday is no longer a day,â€ wrote campaign spokesman Josh TreviÃ±o on Twitter.

Fiorina, whose campaign is stalled in the exploratory phase, will â€œcontinue to take day trips with a limited schedule, like she did in Fresno, in order to meet with people and hear first hand their concerns about our state and our country,â€ said spokeswoman Beth Miller.

Sources familiar with Fiorinaâ€™s event in Fresno say it was neither â€œstrenuousâ€ nor absent of conservatives, contending it was a casual agricultural campaign event. Moreover, the event in Fresno was convenientlyâ€”and necessarilyâ€”located near where Fiorina receives her radiation treatment â€“ whereas Indian Wells is roughly 400 miles away.

But, there is another tweet from PAID Chuck DeVore spokesman Joshua Trevino. 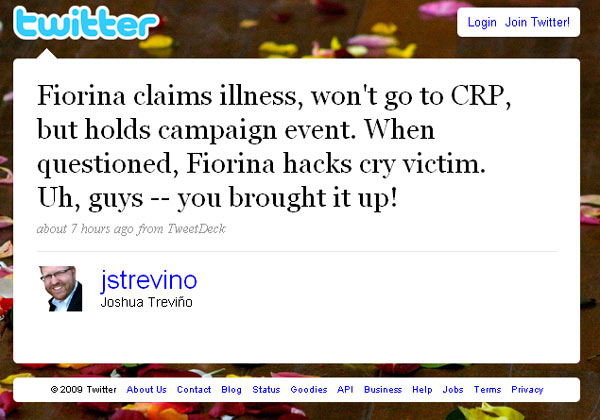 So, Assmblyman Chuck DeVore, a candidate for the GOP nomination for the U.S. Senate implies that Carly Fiorina avoided the California GOP convention and did so by exploiting her breast cancer. Then, DeVore’s spokesman goes after Fiorina in a more forceful and direct way calling her indirectly a LIAR.

Devore’s statement and that of his paid FLACK HACK are REAL classy, right?

Here is the official statement from Carly Fiorina’s spokeswoman:


When she filed with the IRS to open a â€œtesting the watersâ€ committee in August, Carly indicated she would be meeting with a variety of policy makers, local leaders and business owners from around the state. Since then she has met with many people and her visit to Fresno yesterday was a continuation of that effort.

â€œAs you noted in your article last week, Carly is in her final weeks of radiation treatment, which is administered daily. Her schedule needs to accommodate those treatments and make allowances for the cumulative fatigue that occurs towards the end of the course of treatment. For that reason, the decision was made that she not attend the CRP convention this year but, should she run, Carly is looking forward to seeing folks at the February convention. In the meantime, she will continue to take day trips with a limited schedule, like she did in Fresno, in order to meet with people and hear first hand their concerns about our state and our country.

I think this entire matter definitely says something about Chuck DeVore’s character and his questionable campaign behavior.

More later on Chuck DeVore and his violations of the GOP’s 11th Commandment.