Yes, I am late getting this interview processed and posted from the Conejo Valley Republican Women luncheon on January 15, 2010. But, I have posted the unedited audio on You Tube and it is embedded below.

Prior to Carly Fiorina’s arrival, there were a few signing carrying protesters. They did not identify themselves, were sporting a video camera taking video of me taking photos and apparently were not too fond of any of the Republican candidates for office who were going to address the luncheon. 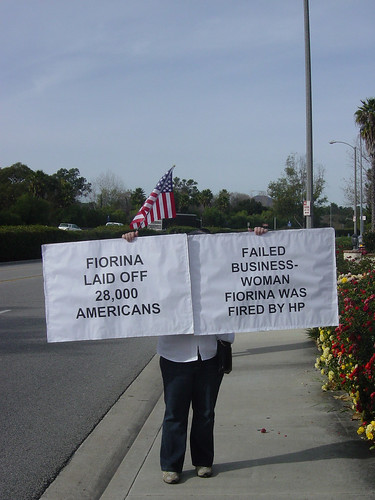 My entire photo set from the luncheon is here.

My initial post of the Conejo Valley Republican Women luncheon is found here.

Fiorina said she would run on the facts of her tenure at Hewlett Packard. While there has been much praise and criticism of her tenure at now the largest computer manufacturer, there is without a doubt that today Hewlett-Packard is a thriving company. Fiorina is anything but a “FAILED” businesswoman.

Let’s look at some of the facts:

Carly became CEO of Hewlett-Packard in July 1999 at the age of 44. Documents obtained from HP and the SEC for the fiscal years 1998 through 2005 show that the year before she became HPâ€™s CEO, the computer giantâ€™s net revenue was $39.3 billion. When she left the company in February 2005, HPâ€™s net revenues had more than doubled to $86.7 billion and continued in the years that followed.

HPâ€™s net earnings during Carlyâ€™s time at HP tell a slightly different story. Profits increased the first few years, took a hit during the technology crash and Compaq merger, and have come roaring back in the years that followed.

I will have more throughout the coming months about Fiorina’s business tenure at Hewlett-Packard and will debunk many of the myths cast about by her political opponents on the right and left.

One thought on “CA-Sen: Carly Fiorina A Brief Interview By Flap”