Jennifer Rubin has the story over at Commentary.

Read it all but pay special attention to this:

Oops. A top official with a pro-Israel organization in Washington tells me, â€œDuring his time in the House, Tom Campbell distinguished himself as no friend of Israel or the pro-Israel community. To suggest otherwise would be dishonest.â€

Part of the reason his opponents are having a field day is that Campbell has taken money ($2,000 in his Senate race in 2000, for example) from some very extreme characters, like Nihad Awad, the co-founder of CAIR, who has said things like â€œIâ€™m in support of the Hamas movementâ€ and (while speaking to the 1999 Islamic Association of Palestine convention) â€Fighting for freedom, fighting for Islam, that is not suicide. They kill themselves for Islam.â€ Most mainstream politicians professing support for Israel wouldnâ€™t take money from such a person or go to the CAIR-headquarters opening.

Here are the contribution records from the Federal Election Commission: 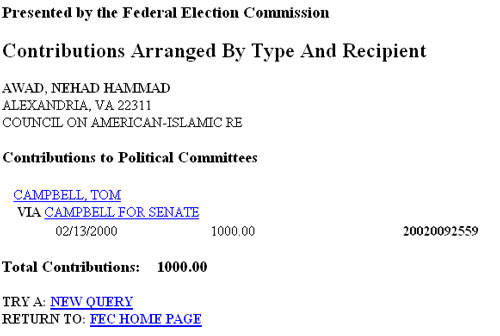 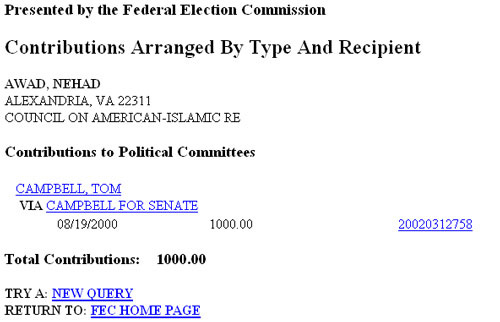 Tom Campbell so far has offered explanations from a dead California Congressman and David Frum. Pretty weak sauce if you ask me.

Since Campbell already took the money and has been seen hob nobbing with terrorist sympathizers, perhaps he can turn to explain the following:


While campaigning in 2000, U.S. Senate candidate Tom Campbell called for a Palestinian state with a capital in Jerusalem, said that Israel received too much funding from the United States, argued that President Clinton was too pro-Israel, and recalled receiving a condolence phone call from Palestinian terrorist Yasser Arafat after he injured himself during a visit to the region.

The revelations come from an article that appeared in the October/November 2000 issue of the Washington Report on Middle East Affairs about Campbell’s run for Senate in 2000 against Dianne Feinstein.

Tom, you have alot of explaining to do…….and Carly Fiorina and Chuck DeVore are not both wrong in calling you out on your abysmal record toward Israel.