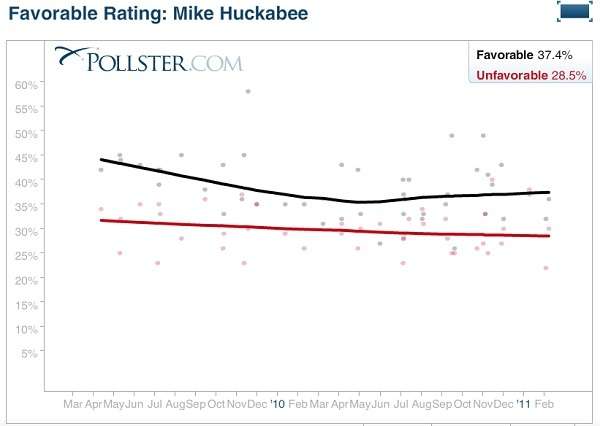 From Pollster: Mike Huckabee Favorable Rating
Mike Huckabee continues to do the best against President Obama in the latest PPP Poll (Pdf).

Obama has slipped a little in the last month, but still leads all of his potential opponents by at least three points. He tops Mike Huckabee, 47-44; Mitt Romney, 46-41; Newt Gingrich, 49-40; and Sarah Palin, 52-40. He also beats two offbeat dark horses: Ron Paul, 48-39, and Donald Trump, 48-34. The generic moderate Republican would win independents, 47-40, and the generic Republican nominee would essentially tie, 44-45, but the named candidates trail with these voters by between five and 24 points.

President Obama is vulnerable to a likeable, trustworthy candidate in Mike Huckabee (look at his favorability chart above) and the GOP is in trouble if they nominate anyone listed in the poll – a sort of no brainer.

But, is Huckabee likely to run?