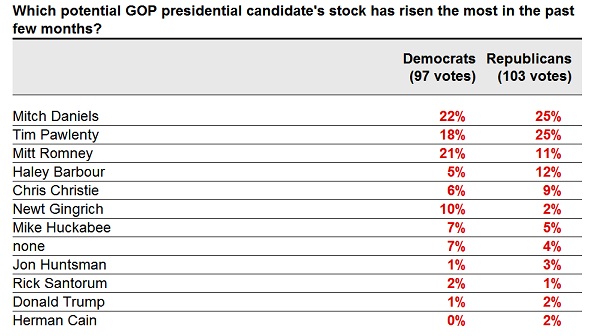 According to the latest National Journal “Insiders” poll.

In the view of Democratic and Republican political operatives, the potential 2012 GOP White House hopefuls whose fortunes are most on the rise are Indiana Gov. Mitch Daniels and former Minnesota Gov. Tim Pawlenty, while former Alaska Gov. Sarah Palin is a rapidly depreciating asset, according to this week’s National Journal Political Insiders Poll.

While no Republican could-be candidate towered above the field, GOP Insiders focused on Daniels and Pawlenty as two whose stock has been rising in recent months, but for very different reasons. Daniels, who has taken few overt steps towards mounting a national campaign, is seen as someone who could champion the Republican themes of shrinking government and cutting spending and also has the record in Indiana to back up that message in a campaign. “The more it becomes about deficit reduction, the better he does,” said one GOP Insider. Even Daniels’ serious demeanor is considered a positive. “Increasingly seen as the anti-Obama — no flash and slogans, but real leadership and a plan,” swooned another Republican.

Pawlenty was rated equally well by GOP Insiders who have been impressed by his disciplined courtship of the party faithful in the early caucus and primary states. Pawlenty is also viewed as a candidate who is acceptable to a broad range of Republicans and has relatively little political baggage. “[He] continues to methodically define himself as the mainstream conservative Republican who can appeal to traditional and new Republican activists,” said one GOP Insider. “Daniels may not run because of family, Barbour has proven surprisingly tone deaf, Gingrich has failed to turn around the marital issue, Palin excites her core group and is unacceptable to everyone else, Romney-care has become the mark of death for Romney,” noted another GOP Insider. “It looks more and more as though everyone has a fatal weakness, other than Pawlenty.”

Democrats generally concurred and saw Daniels as an “adult” and Pawlenty as “organized.”

As the GOP primary season heats up, voters will be looking for someone new – not Mitt Romney and not Newt Gingrich.

Note: The “Insiders” are NOT too high on Sarah Palin. 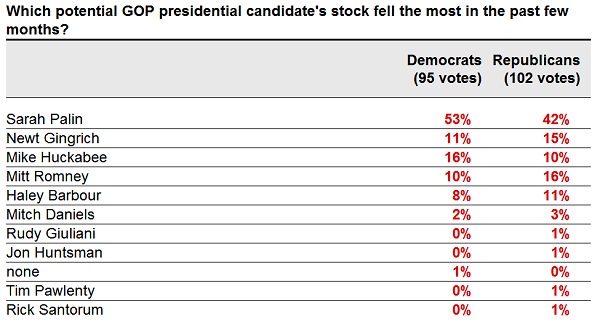