As was the case in February, Republicans’ choice of most important political issue is related to their support for potential Republican presidential candidates.

Mike Huckabee, who is the overall leader among Republicans for the 2012 nomination at this point, leads or ties for the lead among three of the four issue-based GOP groups. He slightly lags Mitt Romney and Sarah Palin among national security- and foreign policy-focused Republicans.

Romney, second overall in GOP 2012 preferences, ties for or is in first place among two out of the four groups, and is in second place among another group.

And, what are the issues for Republicans? 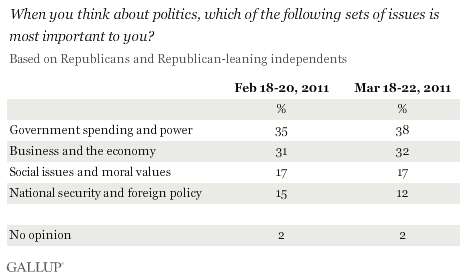 It’s government spending/debt and the economy – not a shocker.

Republicans continue to say government spending and power is the issue of greatest political importance to them (38%), followed closely by business and the economy (32%). Social and moral issues and foreign policy each have constituencies, but are far less important within the party. Republicans’ ratings of these priorities are not substantially changed from a month ago. The lack of change in the perceived importance of foreign affairs is notable given the recent high-profile U.S. military involvement in Libya.

Maybe Indiana Governor Mitch Daniels has a point about a “truce” on the social issues, since it does not appear to be a mighty concern for Republican voters? Of course, neither does national security and Libya.

Americans are concerned about their livelihood, their taxes and the fact they know many who are unemployed or under employed.

So, what does this poll mean – the bottom line?

As was the case in mid-February, the two biggest issues for Republican voters nationwide are government power and spending, and the economy — in that order. The rank-order of these issue segments appears to be generally stable, with only minor shifts since last month’s update.

Republican front-runner Huckabee maintains his relative position of strength across all four issue groups. He dominates among social issues voters and leads or ties other potential candidates in the two biggest Republican issue groups — those focused on government spending and power, and those focused on the economy.

Romney maintains a first- or second-place position among all segments except social issues voters. Palin appears to have a relative weakness among the largest segment of Republicans — those who are focused on the government.

Bachmann, who has the second-highest Positive Intensity Score of any potential Republican candidate at this point, does slightly better among that small group of Republicans most focused on foreign affairs. Tim Pawlenty, in the news last week after he established a presidential exploratory committee, does not do exceptionally well among any of the four issue groups. Haley Barbour, who is also reportedly giving serious consideration to a run for the GOP nomination, does best among Republicans focused on business and the economy.