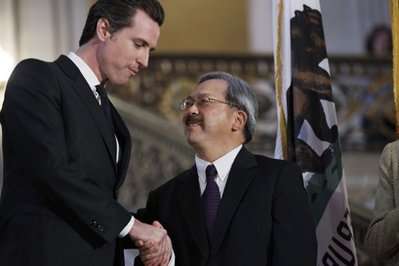 
Less than three months on the job, and already Gavin Newsom is prepping to run for governor again.

A city insider who asked not to be named tells us the new lieutenant governor approached him at a charity fundraiser the other day with a request for help to start raising money for a renewed gubernatorial bid.

Newsom’s inability to compete with the much-better-financed Jerry Brown was one of the reasons he withdrew from last year’s Democratic race and ran instead for lieutenant governor.

Newsom has opened a re-election campaign committee for 2014 – but there’s nothing to stop him from transferring any money he might raise to an exploratory gubernatorial run.

No one from Camp Newsom wanted to comment for the record, but we’re told the lieutenant governor will support Brown for as long as he intends to be governor.

I mean, California Governor Jerry Brown is OLD and on overage time, so to speak, and a POL has to be ready – and ready quick. You never know when a special election will pop up and Jerry Brown will be one term anyway.