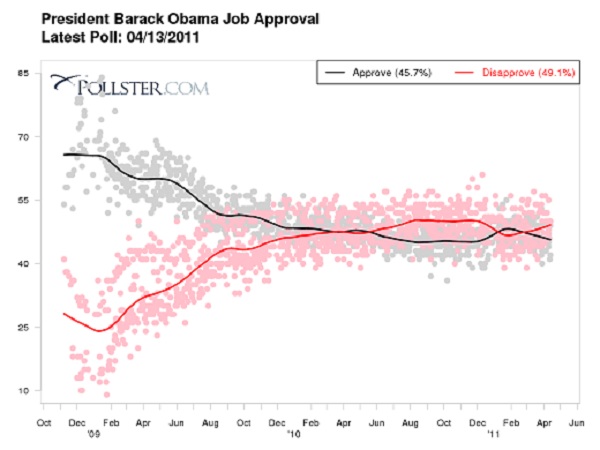 Chart from Pollster
According to the latest PPP Poll.

Again, this is an aggregate national poll but it shows a couple of things:

The president wins by racking up the independent vote by double-digit margins against everyone but Christie, who holds him to a seven-point advantage. The others trail with this group by ten (Huckabee and Romney) to a whopping 28 points (Palin). Obama also pads his leads by getting double-digit GOP support against Gingrich and Palin.

If the GOP wants to beat Obama in 2012, they had better develop a better candidate field, consolidate behind him or her and be ready to hit the ground running after Labor Day 2011. The delay in the GOP selection process may allow say a Rep. Paul Ryan or Governor Mitch Daniels to jump into the field and become the fresh face of the GOP.

The GOP needs such a candidate, if they wish to win next year.