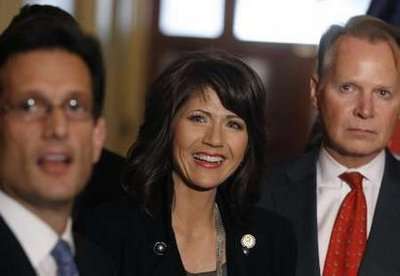 GOP leaders listen to U.S. Speaker of the House John Boehner talk about Senate Democrats and their failure to pass a long-term bill to cut spending and keep the U.S. government running while on Capitol Hill in Washington, March 29, 2011. From L-R are: House Majority Leader Eric Cantor, Rep. Kristi Noem (SD) and Rep. David Dreier (CA)

A very likely casualty since his Congressional District demographics have changed a lot in the last decade.

Dreier got lucky 10 years ago, when a deal was cut to keep him safe for the next decade. After a decade’s worth of demographic changes, though, it will be tough to keep his district even slightly friendly to a Republican — even if the citizen line-drawers were looking out for Dreier (which they probably won’t be). His current district is now more than 50 percent black and Hispanic, it voted for Obama in 2008, and he lives just a few miles from fellow GOP Rep. Gary Miller (R). Smart California observers suggest Dreier may face a primary with either Miller or Rep. Jerry Lewis (R), either of which would probably be in unfriendly territory for Dreier.

And, in a GOP primary election, Dreier has never been a favorite of drive time KFI radio shock jocks John and Ken.

I don’t see Rep. Dreier surviving without a change in campaign strategy and relocation to another adjacent CD.