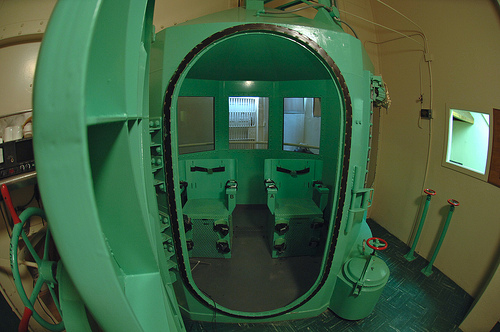 Here is another story about the Obama Administration and their involvement in states desperately seeking to acquire sodium thiopental in order to comply with state court execution orders.

The highest levels of the United States government were initially unsure how to respond last year when California and other states began a worldwide scramble for a scarce lethal injection drug, e-mails between federal officials show.

Ten states went abroad to purchase sodium thiopental, an anesthetic and part of the three-drug cocktail frequently used for executions, Drug Enforcement Administration records show. California was one of eight that made their transaction with Dream Pharma Ltd., a one-man London drug wholesaler operating from the back of a driving school.

In November, as states filed paperwork to import the anesthetic, e-mails between officials at the DEA, the Food and Drug Administration, and Customs and Border Protection document the federal agencies fretted [PDF] over how to respond.

“The White House is involved and trying to sort things out,” wrote a DEA official to unknown recipients in a Nov. 11 e-mail.

The American Civil Liberties Union of Northern California obtained the records last week through a Freedom of Information Act request. The organization has filed numerous records requests with the California Department of Corrections and Rehabilitation and various federal agencies.

Records released to the ACLU have served as the primary source of information about states’ frantic international search for sodium thiopental as domestic supplies of the drug expired or ran out.

Last week, the DEA released 90 pages of internal correspondence to the ACLU. Fifteen of those pages were completely redacted, along with the names of a majority of officials sending and receiving notes.

What remains of the exchanges casts the federal government as worried about the drugs states were brining home for executions.

As I have written before, the federal government and anti-death penalty California POLS are obstructing the use of sodium thiopental for use in executions.

The fact is switching to other drugs will only lead to a circular argument method of obstructing enforcement of the death penalty. Then, there will be the physicians who will need to administer the drugs and the ethics involved with that.

So, just go back to the old gas chamber like the one above, which does not require a physician to administer the drugs or you could hang the convicted criminals.

Those methods are good enough and much more humane than these felons deserve anyway.

How long do you think it would take California to change the law with Jerry Brown as Governor and Kamala Harris as California Attorney General?

Kent Scheidegger, legal director of the conservative Criminal Justice Legal Foundation, thinks one way to impede stall-inducing litigation would be to reinstitute the gas chamber, but use nontoxic gas to replace oxygen. “It gets rid of this whole notion of a quasi-medical procedure,” he explained, when execution is in reality “a punishment” for horrific crimes.

Of course, first Sacramento would have to pass a law. Then there’d be administrative law reviews. Add another decade.