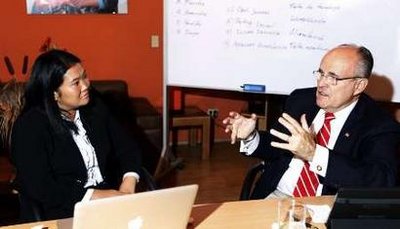 I don’t think so.


At a dinner with journalists on Monday night in Washington, Rep. Peter King, R-N.Y., said he thought former New York City Mayor Rudy Giuliani was leaning toward making another bid for the Republican presidential nomination.

“I get the impression that he is very close to saying he’s going to run,” said King, speaking at a dinner hosted by The American Spectator, a conservative monthly.

King, who was careful to add that he only considers himself on the “outer edge” of Giuliani’s inner circle, said the former mayor and 2008 candidate “has been talking to people on the ground in New Hampshire.” Giuliani ignored the early primary states in 2008, hoping to win the Florida primary to fuel his campaign, but by that time Sen. John McCain, R-Ariz., had seized the momentum.

“If he was making his decision today, he’d run,” King said

Why do I say this?

There has been NO bat signal from Gotham to Rudy’s former 2008 Presidential staffers. Rudy has also been involving himself in private security business matters and why do that if you will have to put them on hold in the near future?

Rudy will participate in the 2012 Presidential campaign as a surrogate for the GOP and will make a great Attorney General some time in the future.

One thought on “President 2012: Rep. Peter King Says Rudy Giuliani is Warming Up in the Bullpen for a Presidential Run”