Unemployment, as measured by Gallup without seasonal adjustment, stood at 9.2% at the end of May — unchanged from mid-May and down slightly from 9.4% at the end of April. It is also slightly lower than it was at the same time last year (9.5%

And, the graph of Americans working part-time and wanting full-time work – also unchanged in May. 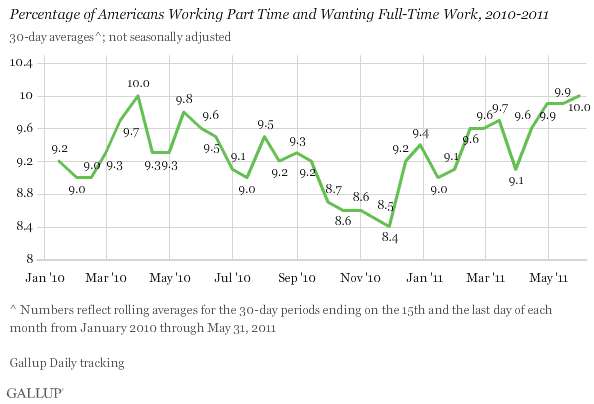 Then, there is the underemployment rate:


Underemployment — which includes both part-time workers wanting full-time employment and the unemployed — has remained flat since mid-March. Underemployment was 19.2% at the end of May, unchanged from 19.3% a month ago and 19.1% a year ago.

But, job seekers are no more hopeful about finding work as compared with a year ago.


Job seekers’ attitudes mirror Gallup’s stagnant employment data. In May, 46% of the underemployed reported being hopeful they would find work in the next four weeks. This number is identical to the 46% reporting hope in May 2010. Hope among the unemployed was 53% in both May 2010 and May 2011. Part-timers continue to be more pessimistic than the unemployed about the potential to find work in the next four weeks (40% in 2010 vs. 41% in 2011).

With the GOP Presidential candidates announcing their runs for the White House today and over the next few weeks, President Obama cannot claim improvement in unemployment. He cannot claim a better economy as unemployment remains stagnant.

With unemployment remaining high, historically, it will be more difficult for the President to make the case for re-election.

Gallup’s data seem to indicate that despite unemployment declines reported by the government, the American workforce has yet to feel a stable improvement in the jobs climate.