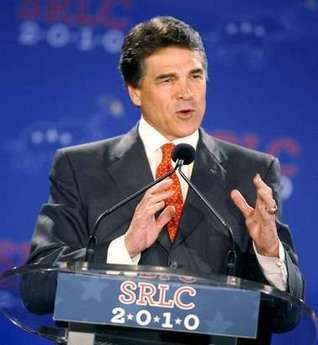 White the Texas Governor says he is thinking about a run for the Presidency, California GOP operatives are starting the pre-requisite fundraising.


Texas Gov. Rick Perry (R) is far from making a decision about a White House bid, but a cadre of California Republicans are raising money on his behalf in the meantime by starting a 527 organization.

California GOP consultant Bob Schuman filed paperwork Monday with the IRS to start Americans for Rick Perry, which aims to raise money and create a grass-roots operation on the governor’s behalf until he makes a decision about running for president.

Elizabeth Blakemore, a well-known Houston-based GOP fundraiser, is raising money for the group. Schuman said the goal is to bring in $500,000 by Aug. 1.

“It’s a 527 that we just started to start an independent expenditure campaign for Gov. Perry until he decides what he’s going to do,” Schuman told Roll Call in a phone interview. “We do have fundraisers on board, and they are frantically trying to raise money right now.”

Perry is far from announcing a campaign for president, but he’s indicated that he is considering a bid and recently scheduled several high-profile appearances at conservative events across the country over the next few weeks. Polls have shown that many GOP primary voters are not satisfied with the current crop of candidates, and without a true Southerner in the hunt, many Republicans see an opening for the governor if he decides to run.

Mitt Romney and Michele Bachmann have been fundraiising in the Golden State for some time now.