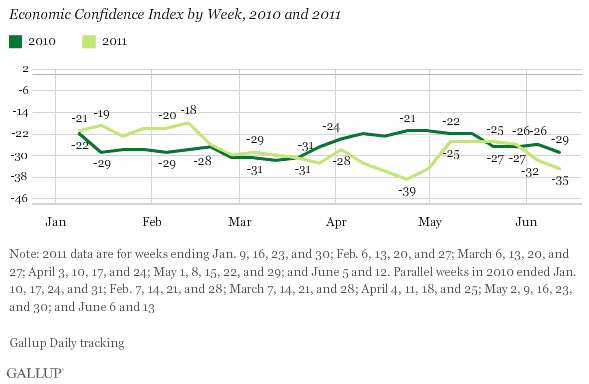 
A sharp deterioration in the jobs outlook and six straight weeks of Wall Street declines sent Americans’ confidence in the U.S. economy plunging to an average of -35 during the week ending June 12 — a decline of nine percentage points from two weeks ago, and six points worse than it was in the same week a year ago. Economic confidence is now approaching a 2011 weekly low.

I can tell you the economy is very poor in Southern California with many of my friends worried about their jobs. Many have been furloughed this past year or taken pay and/or benefits cuts. 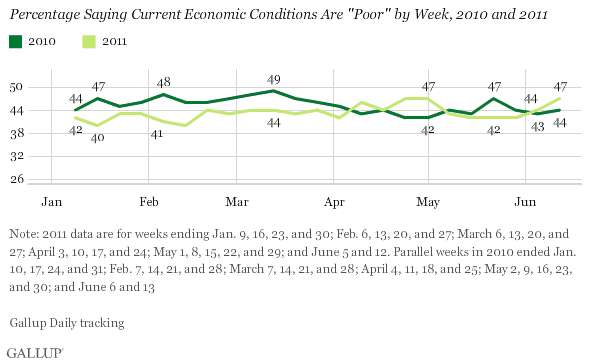 The American economy WILL be the PRIME issue as we go into the 2012 Presidential election cycle. It is all about the economy and American voters will take out their wrath on the POLS.


Gallup’s Economic Confidence measure surged in early May, coincident with the bump in presidential approval after the death of bin Laden. However, the bin Laden “halo effect” on economic confidence has dissipated in early June, as economic news has become increasingly negative.

Unemployment and underemployment as measured by Gallup have shown no improvement compared with a year ago. In this regard, the government’s job numbers have moved closer to Gallup’s numbers as the U.S. unemployment rate as reported by the BLS worsened from 8.8% in March to 9.0% in April and 9.1% in May.

The sharp drop in economic confidence in early June is consistent with the deterioration in the jobs situation, six consecutive weeks of decline on Wall Street, and fears of a global economic slowdown. Even a recent decline in gas prices to $3.78 a gallon has not been enough to offset the decline in consumer optimism — possibly in part because overall pump prices remain more than $1 per gallon higher than they were a year ago.