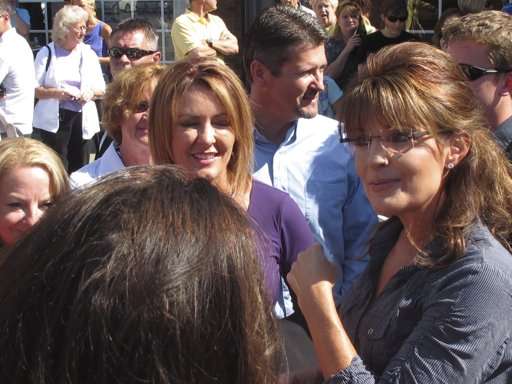 Former Alaska Gov. Sarah Palin, right, greets supporters in downtown Pella, Iowa on Tuesday, June 28, 2011, before attending the first public screening of “The Undefeated,” a documentary about her rise in politics. Palin said Tuesday she’s still thinking about whether to run for president, dismissing a comment from her daughter that she’d already made up her mind

Yes, according to her “man in Iowa.”


Sarah Palin’s husband Todd may be the “First Dude” but according to some the former governor has “a man in Iowa” and that man says the hockey mom will definitely run for the White House in 2012.

Peter Singleton, a lawyer from California is the mysterious “man in Iowa” who says he has never met Palin but has been working tirelessly to help the conservative organize in the Hawkeye state.

Singleton who helped organize Wednesday’s premiere screening of the Palin film “The Undefeated” seems to have no problem comparing the former beauty queen with the likes of Winston Churchill and George Washington.

“She’s the right person at this time,” Singleton told the Telegraph Wednesday in Iowa. “If you look back at Churchill’s time, in 1938 Churchill was unelectable, in 1940 he was indispensable.

Well, maybe. Or is it wishful thinking and a trial balloon?

Hard to say, but we will know when Fox News suspends her.

So, what do you say on a 4th of July announcement?