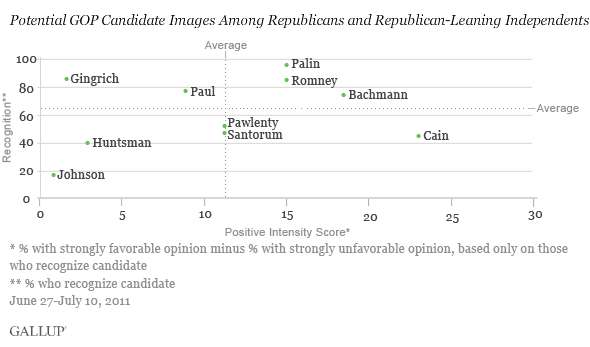 Sarah Palin — who has not yet announced whether she will run for president — remains a formidable presence among Republicans nationwide. She is almost universally recognized, and her current Positive Intensity Score ties her with Mitt Romney, trailing only Herman Cain and Michele Bachmann.

A Newsweek cover story on the former Alaska governor and 2008 vice presidential candidate quoted Palin as saying, “I believe that I can win a national election,” and that she is still thinking about running.

Palin’s 25% strongly favorable rating is the highest of any candidate tested in the latest two-week average, from June 27-July 10, one percentage point ahead of Cain’s 24% and five points ahead of Bachmann’s 20%.

But, Sarah will have to do more than give interviews to Newsweek. She will have to run and run against Michele Bachmann and Mitt Romney. At least two candidates are waiting for Sarah to fish or cut bait in this race: Rick Perry, and Rudy Giuliani.

I continue to doubt she will run and if she does, Palin will hope that Perry and Giuliani jump in as well.

Sarah will do well in a multi-way race in New Hampshire, South Carolina and Florida.

The GOP field to some degree is in a holding pattern, with candidates such as Palin, Texas Gov. Rick Perry, and former New York Mayor Rudy Giuliani sitting on the sidelines while pondering their decisions on whether to officially get into the race. If any or all of these politicians do decide to run, the nature of Republicans’ sentiments about the candidates and whom they favor for their party’s nomination may change. At the moment, Cain and Bachmann generate the highest levels of enthusiasm among rank-and-file Republicans who recognize them, with Palin and Romney trailing them. Of the remaining announced candidates, Tim Pawlenty, Rick Santorum, and Ron Paul do best, while Jon Huntsman, Gingrich, and Gary Johnson are lagging behind in terms of Positive Intensity.